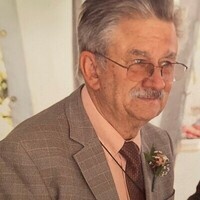 WHITE RIVER JUNCTION – Alan E. Mullen, age 76, passed away peacefully on September 16, 2021 with his wife by his side at their home in White River Junction.

Alan grew up on the family farm in Berkshire, attended Richford High School and graduated in 1962. He continued his education at the Connecticut School of Electronics in New Haven, graduating in 1964. Alan married his high school sweetheart, Connie (Baker) in 1965, they had two wonderful children and were married for 46 years. He had a successful career working for IBM from 1964 until he retired in 1994 where he received an award and was recognized for implementing the use of conductive elastomers that improved productivity in the test process. After retirement, Alan started his own Handyman business and could build or fix anything. As his brother said, “If it’s broke Alan could fix it!” Alan always loved spending time at the family camps on Lake Carmi, camping in Maine with Connie every year, and at Grand Isle State Park with their good friends, the Blake’s and Parizo’s. Every year he looked forward to hunting season and spending time at deer camp hunting and making memories with his family. Later in life, he married Kathie (Hall), who devoted her time and love into caring for Alan throughout his illness and during his last days. They would’ve celebrated their 4th wedding anniversary this October.

He is survived by his wife, Kathie (Hall) Mullen of White River Junction; his children, Steven Mullen and his wife Cathy of Colchester, and Linda Lapierre and her husband Thomas of Chazy, NY; grandchildren, Devyn Wainscott and her husband Matt, Maya Mullen, Conner LaPierre, Carly LaPierre; great grandson, Carter Wainscott; brother, Jay Mullen and his wife Beth; nephews, Michael Mullen, and Eric Baker; stepchildren, Tarah Cantore, and Keith Friend; and sister-in-law, Hallie Baker. Besides his parents, Alan was predeceased by his wife Connie Mullen on April 28, 2011, and his brother-in-law, Charles Baker.

Family and friends are invited to Alan’s Life Celebration events to include visitation on Friday, September 24, 2021 from 12-2:00 PM with a funeral service to follow at 2:00 PM at the Goss Life Celebration Home, 89 Grand Ave., Swanton, VT 05488. Interment will follow in the Franklin Village Cemetery, Square Road, Franklin, VT 05457.

In lieu of flowers, donations in Alan’s memory may be made to support Lewy Body research at, Dementia Society of America, P.O. Box 600, Doylestown, PA 18901 or the American Heart Association, 110 Main Street, Burlington, VT 05401.

To order memorial trees or send flowers to the family in memory of Alan E. Mullen, please visit our flower store.