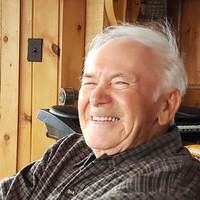 FRANKLIN–Alexis Dandurand, age 96, passed away on Thursday, August 5, 2021 at the home farm in Franklin.

He was born in Clarenceville, Québec November 11, 1924, to the late Leopold and Leona (Roy) Dandurand.

In Alexis’ early life, the Dandurand family were merchants on the border between Clarenceville, Quebec and Alburg, Vermont. He was born in the upstairs lodging above his family's store which was located on the US/Canadian border, half in the US and half in Canada. When Alexis was three years old, the family left the store and moved to a farm in Franklin, Vermont.  Several years later, with the inheritance of a farm in Quebec, and the draw of parochial education, Alexis' parents made a final move to Pike River, Quebec. Most of Alexis' formative years were on his family’s farm in Pike River.  He had many stories to tell about growing up in the Pike River valley near the shores of Lake Champlain with his many siblings and extended family. In 1946, with the help of his father, Alexis and his brother Gerard struck off on their own, and purchased a farm in Franklin, Vermont.  This move would become Alexis' lasting legacy. He married Jeannine Thérese Potvin on July 7, 1951, and the young couple became co-owners of the farm, and started building their future on the land in Franklin and raised six children. They became an integral part of the community in Franklin. Building, expanding, and enhancing their farm was Alexis’ pride and joy. He was a devout Catholic, a of the Knights of Columbus, and a true gentleman who loved his wife and children. In addition to dairy farming, he had a passion for, land conservation, sugaring, music, and forestry.  Throughout the various stages of his adult life, Alexis remained on the farm in Franklin.  He saw to the successful succession of the farm to his youngest son and continued to work on the land well into his senior years.   It was not until the age of 91 that Alexis hung up his chainsaw, and during a genuinely graceful aging process, he became the family patriarch, remained physically active, and an astute observer of the changing seasons.

He is survived by his children and their families, Anne Dandurand and her companion Jean-Guy Provost of Montreal, Québec, Marc Dandurand his wife Ann of Highgate and their children Angela, Amanda & Allison, Dr. Louis Dandurand his wife Kathryn of Montgomery Center and their children Kai & Jade, Dr. Louise-Marie Dandurand of Moscow, ID and her children Liam & Céline, daughter-in-law, Jane (Dandurand) Glick and children Reuben, Ruth-Ellen, Seth & Victoria, and Eric Dandurand his children Jake & Lexa and his companion Alyce Columb and her daughter Carle all of Franklin; great-grandchildren, Ava, Avery, and Amelia; siblings, Madeleine, Paul-Andre and his wife Millie, and George and his wife Maria; sister-in-law, Therese; siblings-in-law, Jean-Guy, Denise, and Paul-Andre; and many nieces, nephews, and cousins and their children. In addition to his parents, Alexis was predeceased by his wife of 40 years, Jeannine (Potvin) Dandurand; their son, Thomas C. Dandurand; son-in-law, Guy R. Knudsen; siblings, Emmanuel, Jean-Marie, Lucille, Gérard, and Annette; sister-in-law, Laura, Irene, Muriel; and Denis Bonforte. and siblings-in-law Gerard, Georgette, Mariette, Claire, Louise, Romuald, Gregoire.

Friends and family are invited to Alexis’ Life Celebration to include the following events on Tuesday, August 10, 2021. Visitation will be held from 9-10:00 AM at The Goss-Spears Life Celebration Home, 96 Dickenson Ave., Enosburg Falls. The Mass of Christian Burial will be held at 11:00 AM at St. Mary’s Catholic Church, 145 Square Rd, Franklin, VT 05457. Interment will follow in St. Mary’s Cemetery in Franklin.

In memory of Alexis, the family encourages you to plant a tree, or contribute to land conservation efforts in your area.

To order memorial trees or send flowers to the family in memory of Alexis Dandurand, please visit our flower store.