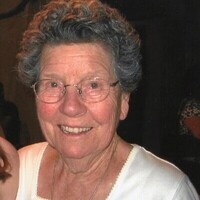 She was born in Ste Brigitte-des-Saults, Quebec on November 10, 1932 to the late Eddie & Marie (Martin) Kane.

Alice was born in Canada and moved to the United States with her family in 1939. She grew up on the family dairy farm in East Sheldon. Her family described her as a “Tom-boy” who loved to be outside. Alice met and married Carlton Russell who was a neighboring farmer down the road. They had three wonderful children together and traveled the world following Carlton’s U.S. Marine career. After selling the farm, the family moved to Florida where Alice went to beautician school in Tallahassee, Florida where she received her beautician license. Alice eventually settled back at the family farm in East Sheldon as a single mom. She worked two jobs to make ends meet, she was a substitute mail carrier and dedicated 25 years to Union Carbide career where coworkers became family. She met her second husband Thomas Swainbank there, the two married and enjoyed several great years together before his passing in 1999. Alice was small in stature but had an enormous personality that was as spunky as ever. She was proud of her Catholic faith, most recently a parishioner at Holy Angels and a member of the Ladies of St. Anne. Alice was always there to brighten the lives of others with her glowing smile. Alice loved growing vegetables, going for walks with her daughter Karen, doing puzzles and reading novels. Wayne, Alice’s son can recall his mom cleaning a perch like a pro. Alice was adored and loved by all who knew her. She was a wife, a mother, a sister, and a grandma too, this is the legacy we have from you.

Family and friends are invited to Alice’s Life Celebration events to include a Mass of Christian Burial on Friday, April 29, 2022 at 11:00 AM at Holy Angels Catholic Church, Lake Street, St. Albans, VT 05478. Interment will be private and at the convenience of the family.

For those who wish, contributions in Alice’s memory may be made to the Franklin County Senior Center, 75 Messenger Street, St. Albans, VT 05478.

To order memorial trees or send flowers to the family in memory of Alice T. Russell Swainbank, please visit our flower store.