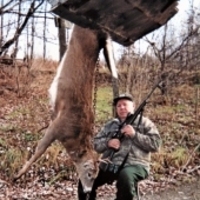 BAKERSFIELD - Andrew B. Dulude, age 80, passed away on Sunday, February 2, 2020 at Elderwood nursing facility in Burlington.

He was born in Fairfax on February 15, 1939, the son of the late Louis Dulude and Elma (Cross) King.

Andy grew up in Franklin County, graduated from Fairfax, and joined the Army National Guard all while running a family dairy farm with his stepfather Roy King, until he retired from farming to become a mail carrier. Andy was also an avid gun and used car collector and seller. His biggest passion in life was hunting. Most nights he could be found up in his deer stand even in his later years made possible by the help of the Gagne family. He enjoyed fishing, snowmobiling, watching wrestling, coaching little league, prime rib dinners with his cousin Robert and his friends every Saturday night, and getting together for the holidays with his Auntie Ethel , as he called her, cousins, and his beloved neighbors. Andy was the caregiver for his mother until her passing with the help of his Auntie Ethel. He was a member of the NRA, the American Legion Post 42 in Enosburg, the Missisquoi Valley Sportsman Club, and was a founding member of the Bakersfield Fire Department in 1968. He will be remembered for his honesty, friendliness, and his caring heart making him a mentor to many.

He is survived by his loving cousins and their families, Diane Messier Lazarski and her husband Al of St. Albans, Mary Hursh and her husband Tenesee of Milton, Connie King of Milton, Beverly Bovat of East Fairfield, Jane Germaine and her husband Ronnie of Milton, Robert Labelle of Georgia, James Jewett of Franklin, Dick Jewett of Highgate, Skylier Messier of Highgate, Michael Messier of Franklin, David Messier of Eden, Shirley Cousin of Burlington; close friends and neighbors, Joe & Deb Aikey, Jack & Judy Carpenter, Mike & Arlene ORourke, David & Beth Jacobs, Brian & Chad Smith, April Williamson & Jim Gagne and their children, Megan, Rebecca, Josh, and Eleanor, Steve Blow, Cheri Lasher, and the Westcom family; and many other neighbors and friends of Bakersfield who will miss him dearly. Besides his parents, Andy was predeceased by his stepfather, Roy King, and a special aunt, Ethel Messier.

A funeral service will be held Wednesday, February 12, 2020 at 1:00 PM at Spears Funeral Home. Interment will be held in the Spring in Maple Grove Cemetery in Bakersfield.

Condolences, photos and favorite memories may be shared through www.gossfs.com
To order memorial trees or send flowers to the family in memory of Andrew B. Dulude, please visit our flower store.