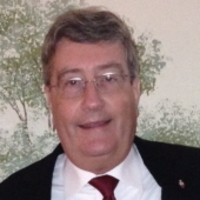 Born in Burlington, Vermont, on September 10, 1953, he was the son of the late Arthur G. and Pauline Marie (Brown) Goodhue.

A 1971 graduate of Burlington High School he furthered his education at Wadhams Hall Seminary College in Ogdensburg, New York and later graduated in 1983 from the New England Institute of Applied Arts and Sciences in Boston, Massachusetts. He has been associated with The Kidder Memorial Home in Swanton since 1981 and he has owned KMH since 2001. He was also a member of both the Vermont and National Funeral Directors Associations.

Since 1981 he has been a member of Nativity of the Blessed Virgin Mary - Saint Louis Parish and volunteered at the church in various ways. He was a member of the Knights of Columbus, Saint Edmund of Canterbury Council 776 and Fourth Degree Assembly 2207 in Swanton. He also served several years on the Town of Swanton Cemetery Commission.

He leaves his faithful, devoted fiance, Ginette Laroche Young of Swanton; two children, Lisa Anne Goodhue of Burlington and Paul Michael Goodhue and his companion, Jesse Meserve of Wenham, Massachusetts; Ginettes children, Amanda Young and her daughter, Lily Grace Whitcomb of Swanton and Jonathan and Arleigh Young and their daughter, Violet Elizabeth of Saint Albans; a brother-in-law and sister-in-law, Maurice and Claire Matte and their sons Adrian and Jordan Matte all of Winooski and several cousins.

The Liturgy of Christian Burial will be celebrated on Thursday, October 19, 2017 at 11:00 a.m. from The Church of the Nativity of the Blessed Virgin Mary, 65 Canada Street, Swanton. Father James E. Zuccaro will be the celebrant and The Reverend Monsignor John J. McDermott the homilist. The Rite of Committal and Interment will follow at the Goodhue family lot in Saint Marys Roman Catholic Cemetery.

Gifts in Arts memory may be made to the Swanton Community Food Shelf, 65 Canada Street, Swanton, VT 05488 or the VNA Respite House, 3113 Roosevelt Highway, Colchester, VT 05466.

Condolences, photos and favorite memories may be shared through www.kiddermemorialhome.com
To order memorial trees or send flowers to the family in memory of Arthur G. Goodhue, please visit our flower store.