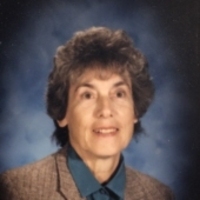 SWANTON - It is with great sadness that the family of Audrey Wallace Fitzpatrick announces her passing on Friday, December 13, 2019, at the age of 88 years. She passed surrounded by her family wrapped in love like a blanket.

Audrey was born on March 22, 1931, in Middletown Springs, VT; the daughter of the late Thomas Wallace and Gladys Wallace (Pickett).

She grew up on the family farm in Middletown Springs with her eleven brothers and sisters where she loved to climb trees and roam the fields. After high school Audrey attended Castleton State College graduating with a Bachelor of Science Degree in Education. While at Castleton she met her late husband and true love Thomas Michael Fitzpatrick Sr. Audrey thoroughly enjoyed her students and her career in education, teaching elementary school in several districts including Middlebury, Alburgh, and Swanton. Most of her career was spent at Swanton Elementary where she taught fourth grade and later became Assistant Principal.

Audrey will be lovingly remembered by her three sons, Thomas, and wife Bonnie; Martin; and Matthew, and wife Lisa. She will also be forever in the hearts of her three grandchildren that she adored, Shannon, Erin, and Katie and her great granddaughters, Gueneviere, Scarlett, and Vivienne. Audrey is also survived by her sisters Alzina (husband Pat DeSantis) and Mary Corsi as well as nieces and nephews.

A graveside service in memory of Audrey will be held later in the spring at the Castleton Cemetery in Castleton, VT.

In lieu of flowers, those who so desire may make memorial donations in memory of Audrey to the Swanton Public Library, 1 First Street Swanton, VT 05488 or to the new hospice room at The Peabody Home, 26 Peabody Place, Franklin, NH 03235.

Condolences, photos and favorite memories may be shared through www.gossfs.com
To order memorial trees or send flowers to the family in memory of Audrey W. Fitzpatrick, please visit our flower store.