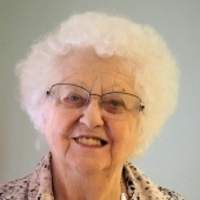 Aurilla A. L Esperance, age 97, passed away peacefully at the Northwestern Medical Center on March 12, 2019.

She was born on August 1, 1921 the daughter of the late Arthur and Delia (Fortier) Gregoire.

She married Bernard Simard on May 17, 1948 who predeceased her in 1972 following 24 years of marriage. She married Louis LEsperance on April 24, 1977. Aurilla was a lifelong member of the Church of the Nativity in Swanton and an active member of the Ladies of St Anne. Aurilla worked many years at Pearls Department Store, both in Enosburg and Swanton. In 1981 she started working for the Foster Grandparents Program and worked nineteen years with the organization. She especially enjoyed the many years she worked in Sandra Williams class at Highgate Elementary. Aurillas extended service with the Foster Grandparents was recognized with the Vermont Volunteer of the year award.

A Mass of Christian Burial will be held at 11 am on Saturday May 11, 2019 at the Church of the Nativity, Swanton, VT

The family would like to thank Holiday House Residential Care Home for the excellent care Aurilla received.

For those who wish to donate, contributions in Aurillas memory may be made to the Foster Grandparents of Northwest Vermont,11 Church Street, St Albans, VT 05478

Condolences, photos and favorite memories can be shared through www.gossfs.com
To order memorial trees or send flowers to the family in memory of Aurilla A. L'Esperance, please visit our flower store.