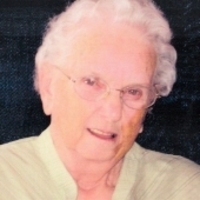 ST. ALBANS - Barbara (Riley) Stone passed away peacefully on June 26, 2019 at the Franklin County Rehab Center in St. Albans, VT at the age of 91. Barbara was born to the late John and Anna (Brennan) Riley on April 28, 1928. She was one of seven children, five preceding her in death.

Barbara grew up in East Fairfield and was a 1945 graduate of Brigham Academy. Barbara married her life partner, Irving Bug Stone on Nov 2, 1946. Together they raised four children - John Francis, Phyllis, Judith, and Mark - in the community of East Fairfield.

Barbara was a loving wife, mother, grandmother, daughter and friend. She had a generous spirit and touched many lives with her kind heart and spunky personality. Some of her happiest moments in life were spent with her beloved grandchildren attending sporting events and school concerts. Barbaras greatest love was caring for her children and she stayed at home with them during their early years. She later worked in the East Fairfield school system where she prepared meals with a smile for the kids each day. Later in life, she worked for Fonda Container, retiring at age 62.

Barbara had many talents and hobbies. Her greatest passion was playing the piano, which she played by ear. One would often find her playing during holidays and Sunday family lunches where she would teach her grandchildren how to play. It was also common to find her playing a tune at the request of friends at an event. Barbara also could be found sitting at her sewing machine or with her knitting needles, where she would make or mend outfits for family and friends. Barbara loved to do crossword puzzles, play solitaire and Yahtzee on her tablet, and watch game shows on TV. An avid Red Sox fan, she nightly would watch her Sox play on NESN.

Her beautiful life will forever be cherished by her family. She is survived by her children and their spouses - John Francis and Mindy Stone, Phyllis and David Bruley, Judith and Richard Bugbee, and Mark and Kelly Stone; 5 grandchildren and their spouses - Richard Jr and Tanya Bugbee, Jeri Lynn Stone, Jodi and Jhon Rodriguez, and Harrison and Emma Stone; great granddaughter Rosalie Rodriquez; brother and sister in law, Horace and Barbara Riley; and many nieces and nephews. She is predeceased by her husband Bug , her parents John and Anna, and her siblings, Walter, Francis, Helen, Robert and Philip.

Family, friends and others whose lives Barbara touched are invited to Spears Funeral Home, 96 Dickinson Avenue, Enosburg Falls on Monday, July 1st from 1:00pm - 3:00pm, followed by a service at 3:00pm. Burial will immediately follow at the Maple Grove Cemetery in Bakersfield. Barbaras family would like to thank the staff of Kings Daughters Home and the Franklin County Rehab Center for the wonderful care they provided Barbara at the end of her life.

For those who wish, contributions can be made in Barbaras memory to Kings Daughters Home, c/o Mary Pappas, 10 Rugg St., St. Albans, VT 05478.

Condolences, photos and favorite memories may be shared through www.gossfs.com
To order memorial trees or send flowers to the family in memory of Barbara M. Stone, please visit our flower store.