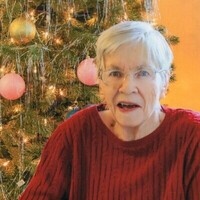 She was born in Palmer, TN on August 12, 1935 to the late Gilbert and Barbara (Scott) Overturf. She spent her first 25 years in the Chattanooga area, where she worked at various jobs.

In 1961, she moved to Enosburg, working first at Carney’s restaurant and then at the Ben Franklin store.

Moving back to Chattanooga area in the eighties she found work as a bookkeeper at Richmond Carpet Mill, followed by a landscaping company and at Dillard’s Department Store.

After retiring in 2005 Bonnie moved back to Enosburg. She was a member of the American Legion Auxiliary Post #42, the Order of Eastern Star- Martha Washington Chapter, the Methodist Church, and the Enosburgh Historical Society. She enjoyed playing cards and reading.

In keeping with Bonnie’s wishes there will be no services. Her ashes will be spread in Tennessee at a later date.

For those who wish, contributions in Bonnie’s memory may be made to the American Legion Auxiliary Post #42, P.O. Box 572, Enosburg Falls, VT 05450 or to a charity of your choice.

To order memorial trees or send flowers to the family in memory of Bonnie H. Goodhue, please visit our flower store.