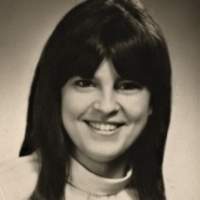 She was born on January 18, 1952 in Montgomery to Robert M. Hogaboom and the late Evelyn (Geraw).

Bonnie grew up in the Burlington Area and graduated from Essex High School in 1970. She married Bernie Mathieu after graduation and the two raised their family in Westford. Bonnie had many jobs including working at a bank, holding several administrative positions, and eventually owning her own business, Victorian Lady B located in Essex. She enjoyed crocheting, completing crossword puzzles, attending church, listening to Christian music, and soaking up the sun. Bonnie will be remembered for her witty sense of humor, her ability to make anyone laugh, and her love for animals.

She is survived by her daughter, Rita Quesnel and her husband Robert of Milton; her father, Robert Hogaboom and his wife Shirley of Fairfax; her grandchildren, Kevin, Kirsten, and Kaleb Mathieu; great grandchildren, Austin, Kevin Jr. Linken, and Lukca; siblings, Bryan Hogaboom and his wife Margit of Adams, NY, and Lisa Campbell and her husband Brian of Colchester; step-sister, Debbie Elwood of Orange City, Florida; brother-in-law, Fabien Parent and his wife Dawn Densmore-Parent of Highgate Center; and several nieces & nephews. Bonnie was predeceased by her husband, Bernie Mathieu; their son, Freddie Mathieu; her mother, Evelyn and her brother, Robert Hogaboom Jr.

Visitation will be held on Tuesday at Spears Funeral Home from 1:00 PM until the hour of the service.

For those who wish, contributions in Bonnies memory may be made to the American Heart Association - VT Chapter, 110 Main Street, Suite 203, Burlington, VT 05401or to the University of Vermont Cancer Center, The Courtyard at Given, 4th Floor North, Burlington, VT 05405.

Condolences, photos and favorite memories may be shared through www.gossfs.com
To order memorial trees or send flowers to the family in memory of Bonnie L. Mathieu, please visit our flower store.