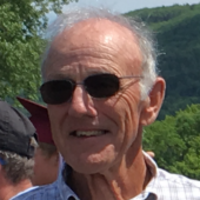 FAIRFIELD - Bradley Paradee, age 76, passed away on Monday, April 20, 2020 at the University of Vermont Medical Center in Burlington with his wife by his side and his family close by after a hard-fought battle with COVID-19.

He was born in Fairfield on July 21, 1943 to the late Hubert & Annabelle (Quimby) Paradee.

Brad married Shirley (Emch) on April 20, 1968 and they raised their family in Fairfield. He had a tremendous work ethic and in his free time he could be found either in the woods, or maintaining his meticulous lawn. He especially enjoyed sugaring with his family and friends. Brad loved sports. Watching his grandkids play, watching the Yankees and NY Giants, playing softball with his friends in his younger years. If you spent any time with him you would have been entertained with a story about some sporting event from the past.

Brad started his work career on the family farm and then transitioned to a long career driving. He delivered grain to farms all over Vermont and New England for 35+ years, never having an accident. Brad was well known in his work circles for having the cleanest grain truck in VT. Anyone who knew Brad knew who he was: an honest man of integrity who loved his family, and friends. Brad was always ready to help. He thrived on making sure everyone around him was taken care of and was ready to lend a hand to anyone who needed it.

He is survived by his wife of 52 years, Shirley Paradee of Fairfield; their children, Todd Paradee of Bakersfield, Troy Paradee and his partner Sheri Bedard of Bristol, and Heather Elwood and her husband Kevin of Enosburg; six grandchildren, Carter, Tucker, Sam, Griffin, Fisher & Annabelle; his brother, Lee Paradee and his wife Leisha of Swanton; siblings-in-law, Arreta Boyd of Berlin, Ruth Quintin of Colchester, Wendell Emch and his wife Bev of Enosburg Falls, Jean Richard and her husband Bubby of Franklin, Joan Myott and her husband Allen of Enosburg Falls, and Cathy Emch of Enosburg Falls; and many nieces & nephews. Besides his parents, Brad was predeceased by his daughters in-law Pam Chase Paradee (Troy) and Richelle Peters Paradee (Todd), by his siblings, Gary Paradee and Reba Tibbetts; and siblings-in-law, Carol Greenwood, Ralph Emch, Paul Quintin and Bruce Boyd.

Our family wants to extend great thanks to the wonderful staff at NMC and UVM Medical for all of their extreme help and effort for Brad and our family.

A memorial service will be held on Friday, August 14, 2020 at 2:00 PM on the back lawn at Spears Funeral Home along the Missisquoi River. To honor Brad, please come as he would, dressed comfortably and respectfully.

In lieu of flowers, we would like you to consider making a donation to Cystic Fibrosis Foundation, Northern New England Chapter, 114 Perimeter Road, Nashua, NH 03063 or to the Jim Bashaw Fund, c/o Northwestern Medical Center, 133 Fairfield St., St. Albans, VT 05478.

Condolences, photos and favorite memories may be shared through www.gossfs.com
To order memorial trees or send flowers to the family in memory of Bradley Paradee, please visit our flower store.