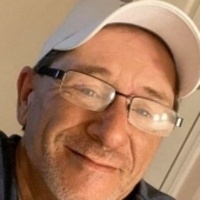 ST. ALBANS - Brian M. OLena, age 52, passed away on Sunday, September 6, 2020 at the University of Vermont Medical Center in Burlington.

He was born in St. Albans on July 15, 1968 to Jean Monty & Sheila (Letourneau) Benson and raised by Sheila & Louis Bob OLena.

Brian grew up in Swanton and attended Missisquoi Valley Union High School. He was affectionately called Macho Man by his sisters because he loved watching WWF and then practicing the moves on them. He had several jobs throughout his life, but his favorite was working for Tony Handy at Graceys Liquor Store. He knew every bottle in the store; the shape, the alcohol content, the best bargain - pretty impressive for someone who didnt like to drink. Brians passion was riding his motorcycle, and he also enjoyed tinkering on anything with an engine.

Friends and family are invited to attend Brians Life Celebration on Friday, September 18, 2020 at 1:00 PM at Riverside Cemetery, VT Route 78, Swanton, VT. Please come dressed as if you were heading on a motorcycle ride.

Brian was on a waiting list to receive a liver transplant. In his memory, we ask that you consider helping others by reaching out to the Living Donor Program at Mass General Hospital in Boston, MA.

Condolences, photos and favorite memories may be shared through www.gossfs.com
To order memorial trees or send flowers to the family in memory of Brian M. O'Lena, please visit our flower store.