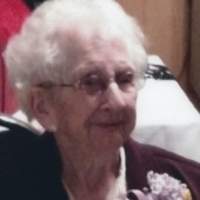 Cecile attend school in Berkshire and on March 31, 1932 she married Ernest Nutting. After they got married Cecile and Ernest farmed in Jay, VT for several years before they moved to North Troy. They lived in Brattleboro, and in parts of New Hampshire before settling in Enosburg in 1982. Cecile worked for American Optical in Brattleboro. She had many hobbies which included, gardening, bird watching, completing puzzles, listening to country music, and traveling with her family. Cecile was always family oriented and she looked forward to hosting Sunday night dinners, where no one ever left hungry.

A funeral service will be held on Friday, September 7, 2018 at 11:00 AM at Spears Funeral Home. Interment will take place in Hillside Cemetery in Richford on Saturday, September 8, 2018 at 9:00 AM.

For those who wish, contributions in Ceciles memory may be made to Franklin County Home Health, 3 Home Health Circle, St. Albans, VT 05478 or Enosburgh Ambulance Service, P.O. Box 465 Enosburg Falls, VT 05450.
To order memorial trees or send flowers to the family in memory of Cecile P. Nutting, please visit our flower store.