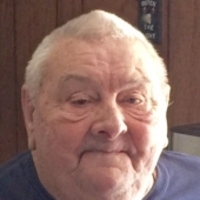 He was born in Marshfield, VT on August 22, 1931 to the late Bill & May (Brown) Lunge and Rolla White. He was one of nine children.

Cedrics life revolved around farming. After attending school in Bakersfield, he started working at farms around Franklin County and then began working at Worthmore Feeds in Brattleboro. While living in southern Vermont, he met and married Evelyn (Woodley) on April 25, 1953. He returned to Franklin County with his family in 1967. Cedric owned farms in Enosburg, Berkshire and East Fairfield; he bought the farm in Enosburg in 1967, Berkshire in 1982 and settled in East Fairfield in 1988. He was very active in the farming community and helped with several organizations including the UVM Extension Service, Farm Bureau and 4-H. Cedric retired from farming in 2000.

In keeping with Cedrics wishes there will be no public services.

For those who wish, contributions in Cedrics memory may be made to the Lucas James Williams Youth Fund, P.O. Box 85, Bakersfield, VT 05442.

Condolences, photos and favorite memories may be shared through www.gossfs.com
To order memorial trees or send flowers to the family in memory of Cedric C. White Sr., please visit our flower store.