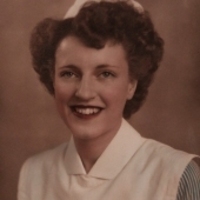 Charlotte married Lawrence Buster Donlon October 14, 1952. They made their home in Enosburg Falls, VT. She was a graduate of Enosburg Falls High School class of 1943, a graduate of the Mary Fletcher Hospital School of Nursing, the New York Poly Clinic post graduate school, and attended the University of Vermont. Charlotte was an active participant in the field of nursing having held Supervisory positions in both Chittenden and Franklin counties during the late 50s through the 60s and 70s.

Charlotte and Buster cultivated prize winning gladiolus and later tea roses that they shared with many. Upon retirement Charlotte said that she found her hands as she developed skills in cross stitching and quilting. Many family members and friends were recipients of her handiwork. She also was a long- time member of the Enosburg Falls United Methodist Church.

She lived as the true solid Vermonter that she was full of integrity, pride, and individuality. Her self sufficiency and inner strength were an inspiration to us all, and we were blessed to have been a part of her journey.

Charlotte leaves her son Bill and his wife Cheryl (Southwell) Donlon of Enosburg Falls, VT; two special Grand Children, Seth William Donlon and his wife Svenja of Greensboro, VT, and Kate Chelsea Donlon of Columbus, OH, attending Ohio State University for her PhD; and their mother Heather Skilling; Step Grand Children, Jeremy Southwell and Joshua Southwell with his wife Michelle; a step Great Grandson Geoffrey Southwell, all of Colchester, VT; several nephews and nieces both on the Leach side and Donlon side that she dearly loved and was so proud of, and a special niece Dorothy Leach Childs.

Charlotte was predeceased by her husband Lawrence (Buster) Donlon March 20, 2009, her brother Howard (Buzzy) and his wife Louise, her sister Sabra Leach and her husband Anthony (Tony) Michel.

The family expresses deep appreciation to Dr. VonLePel for her years of compassion and understanding.

At Charlottes request, committal services will be private and held at the convenience of the family in the Sheldon Village Cemetery.

A Celebration of Life will be held Saturday, July 7, 2018 at 1:00 PM at Charlottes Home at 167 Watertower Road, Enosburg Falls for family and friends.

As an expression of sympathy, Charlottes family would appreciate memorial contributions to be made to the Birds of Vermont Museum, to 900 Sherman Hollow Road, Huntington, VT 05462.

Condolences, photos and favorite memories may be shared through www.gossfs.com
To order memorial trees or send flowers to the family in memory of Charlotte L Donlon, please visit our flower store.