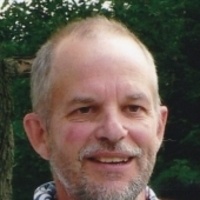 FRANKLIN - Christopher Wolfe O\u0027Shea moved on early Saturday morning, October 26th after complications with Dementia. His spirit lives on through his family and friends.

"Buzzy" as he was commonly known was born June 7th, 1949 in Pittsfield Massachusetts. He was the second son of Sheila Casey and Bernard O\u0027Shea. Throughout a transient childhood, Buzz lived in many different communities which made him the incredibly well rounded person we knew him to be. He spent most of his young life in Vermont becoming adept at swimming, fishing, skiing and most other Northcountry pursuits. In his young adult life, Buzz attended Deerfield Academy. It was there he excelled in team sports which would serve him well through life. Hockey, Baseball, Football and most especially Track came very easily to him. His speed and agility came in handy as he "outran every bully." To be fair, the pacifism he was taught from an early age proved to be one his biggest assets in life. Pretty much always there to diffuse a situation and come to a peaceful solution.

After Prep school Buzz moved on to the University of North Carolina at Chapel Hill where he discovered his new passion. Writing. His father, already heavily involved in politics and running his own newspaper supported and encouraged him to become involved in journalism. Through the tumultuous late 60\u0027s, Buzz was really able to grasp what the world needed and why. Not only did Buzz excel as a journalist but soon joined his father at the newspaper and made an immediate impact. He captured the wild world around him and somehow combined it with the rural landscape and sensibilities he had grown up with. His ability to mesh activism, truth and humility and bring it to a broad spectrum of readers was truly awe-inspiring. All the while with a sense of humor and wit that allowed people to put aside their differences and work toward a common goal. He eventually took the reigns from his father and was both the editor and publisher of The County Courier.

During Buzz\u0027s time in Chapel Hill, he made lifelong fiends in a very short amount of time. Many of his best friends there (including rival Duke students) followed him to Vermont to check out the scene. Almost all of them stayed. Forever changing the landscape of the tiny town that came to be home once again for him. They started softball teams, played mud football, wrote about politics, lived off the land and occasionally partied a bit. It was during this time Buzz met the love of his life. Patricia (Fink) O\u0027Shea in 1971. They built a hippie love shack on Chester A. Arthur road complete with chicken coops and large gardens before moving to 54 Orchard Street, Enosburg Falls in 1985. This address was so important to so many over the years. The open door policy that helped so many continued under Buzz\u0027s watch. Giving people work when they needed it. Feeding people when they were hungry and giving people a place to crash when they had nowhere else to go. Pat and Buzz were never so happy as when the house was flooded with kids and friends, which it almost always was.

Buzz really fell in love with the water during his middle years of his life. He Served on the board of directors of both the Franklin Watershed committee and the Missisquoi River Basin Association. In 2008, Buzz traveled to Washington DC and testified before the US House in support of the legislation to make the Missisquoi and Trout Rivers designated as Wild and Scenic. He desired cleaner water for everyone and was active in making this become a reality. A windsurfing and snorkeling habit took him around the globe and his passion for nordic skating kept him on the water year round. He was always an avid sailor and rower as well. It was this need for water that brought him to build his house on Lake Carmi in 1998. Buzz and Pat had already fallen in love with the lake when they had a camp there ten years earlier. The beautiful spot he and Pat called home for two decades was definitely his sanctuary. His infatuation with birds was on full display as he watched them migrate and inhabit the lake. He followed in his mothers footsteps as he began to document and write about the birds daily. The Lake was also a great place for Buzz to study the weather. Something he had previously done professionally for the National Weather Service. His curiosity for the world around him came full circle. It was also around this time he reaffirmed his love for the golf as he had recently retired from O\u0027Shea Publishing. His goal was to someday shoot his age on the course. A feat he would have no doubt accomplished if Father Time would have afforded him that chance.

A Celebration of Buzz\u0027s life is planned for 4:30 May 28th, 2020 at The Enosburg Falls Country Club. For anyone who wishes to play a round in Buzz\u0027s memory, we will have a shotgun start at one o\u0027clock. Please E-mail Eamon at [email protected] to be put on the list.

In Lieu of flowers, cards, donations....Have a friendly conversation with someone this week. Volunteer to be a coach. Do something for the environment or just call up and old friend. That is what Buzz would have wanted. Until then, as Buzz would say "We\u0027ll see ya when we see ya."

Condolences, photos and favorite memories may be shared through www.gossfs.com
To order memorial trees or send flowers to the family in memory of Chris "Buzz" O'Shea, please visit our flower store.