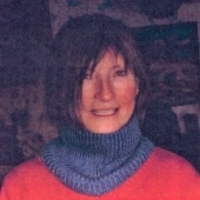 BERKSHIRE - Berkshire - Christa M. Chevalier, age 82, left this earth unexpectedly on Wednesday, February 19, 2020 at Our Lady of the Meadows in Richford, VT.

Christa was born in Limbach, Germany on March 25, 1937 to the late Heinz and Hilda (Kasubeck) Hbler.

When Christa was 6 years old, her family was forced to flee in the middle of the night to escape the Russian soldiers that stormed their home. Her family ran through the night eventually ending up in Dresden where they lived out World War II. She would spend many hours with her beloved Oma on the farm cultivating the great imagination and sense of humor that would make her who she was.

It was in her native Germany that she met the love of her life, David. He was in the audience of a show that Christa was a dancer in. He asked to meet her and as she loved to tell you, it was Love at First Sight. They married on June 23, 1956, welcoming their first daughter, Diana, that same year with their second daughter, Denise, completing the family in 1958.

David and Christa moved their family many times during their time in the Air Force finally settling in Richford upon retirement. The years on Dewey Street were some of their happiest. It was in this house that Christa began her career as a published childrens book author & illustrator. She would eventually publish eight books featuring her beloved Spence character. Christa was also a very talented artist, sharing her work in watercolors, oils and pen & ink. She taught many aspiring artists in the community. They enjoyed spending time with friends, especially the group that gathered at the Black Lantern Inn. Christa excelled in the kitchen, creating many wonderful memories over her dishes. David and Christa would become grandparents for the first time in 1973, ever after always known as Opie and Omie.

In 1988, they built their forever home in Berkshire. David and Christa loved to spend time outdoors with their dogs; cross-country skiing, gardening and walking through the woods on their property. Christa volunteered at the Berkshire Elementary School for over 25 years giving the students lessons in writing and illustrating. However, she taught them so many things that cant be measured. Children that might never have had the encouragement to tackle their dreams or felt the unconditional support of a trusted adult in their life had Christa to install that confidence in them. She submitted their work to many publications and eventually received a commendation from President Obama. Although Alzheimers took many of her memories, Christa still spoke about all of the children confirming the impact that they made on her life.

In her later years, Christa would become more vocal in her politics and spent many hours writing to any elected official that would listen to what she had to say. She was sure that with many phone calls, letters to the Editor and newspaper articles you could change the world. She was a recycler before people knew that you could, believed that there was not an ailment that could not be cured by nature (not Big Pharmacy) and that children are our hope for the future. Christa was also a great supporter of animals; raising money for the Franklin County Animal Rescue for many years; raffle tickets in particular.

She will be greatly missed by her beloved husband of 63 years, David, of Berkshire and their dog, Addie; daughters, Diana Gadue and her husband Jeff of Montgomery and Denise Delorme-Richling and her husband Robert of Westford; grandchildren, Christina Adamczak and her husband Tom of St. Albans, David Burnham of Florida, Darcy Burnham of New York and Jacob Chevalier of Rutland; great-grandchildren, Nathan, Christian and Grace Adamczak of St. Albans; Jalisa and Robert Mejias of New York; brother, Arndt Hbler of Berlin, Germany and special friend, Lise Roberts, whose love and support made this journey a little easier.

The family would like to extend a heartfelt thank you to the staff at Our Lady of Meadows in Richford for giving Omie such loving care these past few weeks. She blossomed with you and was the happiest we had seen her in a long time. We are glad that she was able to share her singing and dancing with everyone. It gives us great comfort that her last day was spent doing what she enjoyed.

And even though we are grieving her, we know that she was greeted by her family that predeceased her; parents, Heinz and Hilda; siblings Barbara and Jrgen; in-laws, Cleo (Mary Margaret) Chevalier and Mary Jo Treadway; dogs, Dimi, Sergeoff, Danny Boy, Petey & Jackson.

A celebration of life will be held on Monday, March 2, 2020 at 11:00 AM at Spears Funeral Home, 96 Dickinson Ave, Enosburg Falls, VT 05450. Interment will be held in the Spring in the Richford Center Cemetery.

Visitation will be held on Monday at Spears Funeral Home from 10:00 AM until the hour of the service.

Condolences, photos and favorite memories may be shared through www.gossfs.com
To order memorial trees or send flowers to the family in memory of Christa M. Chevalier, please visit our flower store.