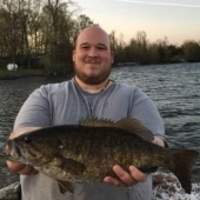 He was born in St. Albans on September 27, 1991 to Christopher Delisle Sr. and Mary Bray.

Christopher attended Enosburg Falls High School. He enjoyed fishing, playing video games, going for walks, camping, and riding four-wheelers and snow mobiles. Christopher cherished the time he spent with his children and nieces and nephews. He will be remembered most for his generosity, whether that was picking up a stray cat on his way home or giving his last dollar to anyone in need. He was a true friend and loved by many.

Christopher leaves the love of his life, Brittany Martin; his children, Arianna Martin, Keegan Delisle, and Ryder Delisle; his father Christopher Delisle Sr. and his significant other, Peggy Lontine of Montgomery; his mother, Mary Bray and her significant other, Randy Thompson of St. Albans; his siblings and their families, Connie Bray and her significant other Tim Mason of Richford and their children Destiny, Keanoa, Jasmine, and Timothy Jr.; Anthony Bray and his wife Amanda of Richford and their children, Eli and Alessa; Damien Delisle of Richford; step-brothers, Ian and Ethan Bryce of Montgomery; his grandfather, Chester Bray of Highgate; his aunt, Spring Beyor and her husband James Sr. of Highgate; his uncle, Jeffrey Bray of Highgate; his life-long friend, Phillip Walker; special friends, Ernie Clark Jr., Kaleb Lavallee, and Nelson; and many other friends. Christopher was predeceased by his grandmothers, Beverly Delisle and Barbara Bray; his uncle, Mark Greenia; and his aunt, Doris.

For those who wish, contributions in Christophers name can be made to help his family with funeral costs to Spears Funeral Home, P.O. Box 396, Enosburg Falls, Vermont 05450.
To order memorial trees or send flowers to the family in memory of Christopher R. Delisle Jr., please visit our flower store.