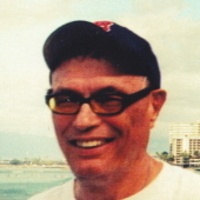 SWANTON - Christopher M. Sharrow, age 79, passed away peacefully on Sunday, June 7, 2020 at the McClure Miller Respite House in Colchester from the results of a stroke.

He was born on January 5, 1941 in Saint Albans to the late Clement & Mary Loretta (Wry) Sharrow.

Chris graduated from St. Marys High School and then attended Loyola College in Chicago. He married Nellie (Gilman) in 1977. He served in the United States Army, stationed at Fort McClellan, AL and later joined the Vermont National Guard. He was also a proud member of the Knights of Columbus of Swanton, a fourth-degree knight, the American Legion Post #1, and an Assistant Scout Master Boy Scout Troop #823. Chris worked for Central Vermont Railway for 35 years as a clerk and crew dispatcher in various train stations from St. Albans to New London., CT. When CVR was sold, he went to work for Labat-Anderson at INS in St. Albans as a data entry clerk where he remained until he retired in 2002. Chris enjoyed fishing and boating on Lake Champlain for most of his life. Nothing made Chris prouder than to bring home a pail full of perch or a large bass. He also enjoyed deer hunting and camping at his cabin in the woods of Chelsea, VT. The family spent many summer weekends camping at Lake Carmi State Park, traveling to Hawaii and the Virgin Islands to bask in the sun.

He is survived by his wife, Nellie Sharrow; daughter, Kimberly Sharrow; son, Michael Sharrow; sister, Marilyn Livingston and her husband, Roger; sisters-in-law, Jackie Sharrow, and Rhoda Ackerman and her husband Bill; brother-in-law, Donald Gilman and his wife Jean; and several nieces and nephews. Besides his parents; Chris was predeceased by his brothers, Irving (Nick) Sharrow, John (Jack) Sharrow; and sister, Virginia Croce.

Condolences, photos and favorite memories may be shared through www.gossfs.com
To order memorial trees or send flowers to the family in memory of Christopher M. Sharrow, please visit our flower store.