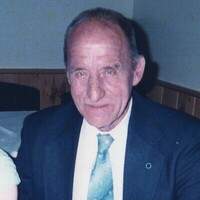 He was born on August 16, 1934 in Sheldon to the late Clarence Sr. & Beatrice (LaChapelle) Bocash.

Clarence was a life-long resident of Sheldon and an active member of the community. He served on the Select Board for many years, and even as chair for a few. He worked as a logger in his early years before going to work for the Town of Georgia as their Road Foreman. Clarence was always looking for ways to save the town money, and with the help of his old-time yankee ingenuity he was able to fabricate several pieces of equipment that are most likely still working today. He retired in the mid 1990’s, but he couldn’t sit still for long! He helped out the road crews in his hometown of Sheldon and also the town of Fairfield. He was a Mason for over 55 years and belonged to the Lincoln Lodge #78 of Enosburg Falls. His favorite hobbies included hunting, maple sugaring, working on cars and other mechanical equipment, and dancing with Dorothy at the Sheldon Casino. Throughout retirement, Clarence and Dorothy traveled around Vermont in their RV to camp and attend blue grass festivals. He will be remembered for his ability to jury rig just about anything, and his “make do with what you have” mentality.

He is survived by his wife, Dorothy (Vance) Bocash of Sheldon; their son, Kevin Bocash and his wife Faith of Essex Jct.; three grandchildren, Kyle Bocash of Dallas, TX, Craig Bocash of St. Jose, CA, and Hillary Frumkin and her husband Nathan of Scottsdale, AZ; siblings, Peter Bocash and his significant other Mary Lucas of Fairfield, Dale Duffy and her husband Lloyd of Fairfield, and Joan Pariseau and her significant other Raymond of Enosburg Falls; siblings-in-law, Lyle Ladieu of Swanton, and Paulette Bocash of Sheldon; and many nieces & nephews. In addition to his parents, Clarence was predeceased by his siblings, Phyllis Sartwell and her husband Miles, Doris Derry and her husband Lester, Harry Bocash his twin, Ronald Bocash and his wife Suzie, and Janice Ladieu; and his brother-in-law, Frank Pariseau.

Clarence’s family will be holding his life celebration next spring in the Sheldon Village Cemetery.

To order memorial trees or send flowers to the family in memory of Clarence E. Bocash Jr., please visit our flower store.