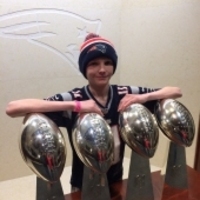 BAKERSFIELD - Cole Paquette, age 14, passed away Tuesday, September 26, 2017 surrounded by his parents, siblings and grandparents, after a courageous battle with cancer at the University of Vermont Medical Center in Burlington.

Cole graduated from Bakersfield Middle School last year and he was just starting his freshman year at Enosburg Falls High School. He was a sports fanatic that loved playing and watching everything. He also enjoyed hanging out and playing video games with his friends. Cole was stubborn and sarcastic at times, but both traits served him well with his recent battle. Cole was a fighter. He fought every single day for the past year and he inspired so many of us along the way. He became the star of #TEAMCRP and his determination will always be remembered. Cole will also be remembered as the best big brother ever and for his quick wit.

A memorial service will be held Sunday, October 1, 2017 at 3:00 PM at Bakersfield Elementary School, 82 Academy Dr., Bakersfield. Interment will follow in St. Georges Cemetery in Bakersfield.

Condolences, photos and favorite memories may be shared through www.spearsfuneralhome.com
To order memorial trees or send flowers to the family in memory of Cole Paquette, please visit our flower store.