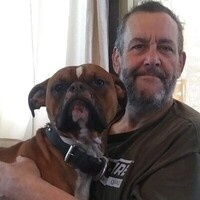 Corey grew up in Highgate and attended Highgate Elementary School and graduated from Missisquoi Valley Union High School along side his mother in 1986. After graduation he followed his passion for mechanics and worked for his father’s business, Machia’s Used Cars. In 1989, he attended MAC Truck School in Toronto where he was able to master his craft at his father’s garage and Kevin L. Jordan Excavating and various business in the area in his field. He enjoyed tinkering, getting inspired from his favorite DIY shows, and hunting. Corey loved to be the life of the party, when he walked into a room, he was able to captivate all with his animated story telling and boisterous energy. He was a loyal, generous friend who would give the shirt off his back if it meant he could help someone in need and he had an unmatched ability to make others feel like they were the most important person. Corey above everything was a supportive, loving, father who put his children first and did everything he could to provide for them.

He is survived by his fiancé of 26 years, Lela Omiak of Highgate; his son, Anthony Machia and his companion Heather Lafar of Highgate Center; his girls, Adrianna Omiak and her significant other Mitchal Shedrick of Swanton, Samantha L’Esperance and her fiancé Steven Lalino of Youngsville, NC, Karen L’Esperance and her significant other Kodi Burnor of Swanton and their mother Rebecca L’Esperance; grandchildren, Landyn Shedrick, and Alice Burnor; siblings, Sherry Freeman and her mate Michael Paradis of Fort Meyers, FL, and Keith Machia and his wife Louise of Highgate; several beloved nieces and nephews. Besides his parents, Corey was predeceased by a brother, Scott Machia.

To order memorial trees or send flowers to the family in memory of Corey "Spanky" R. Machia, please visit our flower store.