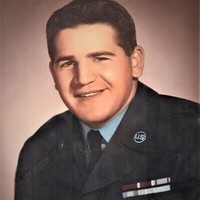 He was born on January 1, 1935 in Sheldon Springs, VT.  He Joined the Navy at age 17 and was a Plane Captain for F9F-5 Panther Aircraft on the USS Tarawa before transferring to the Air Force where he was a Ground Control Radar Operator.  He traveled all over the world during his time in the service and loved talking about his travels and experiences.  He was a proud Korean War Veteran and was a lifetime member of the VFW Post 2138.  When he was discharged from the military in 1964, he moved with his wife and two children at the time and drove cross country from Red Bluff, CA to CT.  Dan worked for the Rocky Hill Board of Ed for a few years and then went to Middlesex Community College where he received an Associate’s Degree in Criminal Justice and later became certified as an EMT.  He went on to attend the Meriden Police Academy and after graduation worked for the State of CT Veteran’s Home and Hospital for 25+ years as an Agency Police Officer.  Dan was liked and well respected by his community and was known for his love of smoking his pipe, his friendly disposition and his witty humor.  He was a self-taught guitar player and loved to play and sing his favorite country songs.

Dan lost his wife, Yvonne (Rivers) Doner, of 53 years, in 2011 after a short illness and is survived by his three children, Michael Doner and his wife Jo-Ann of Southington, Irene Rumpza and her Fiancé, Kevin Sombric of Meriden and Michele Bates Lamarre and her husband Jim of Rocky Hill. He has six grandchildren, Robert, Alyssa, Laura, Jordan, Chris and Kara, as well as five great grandchildren.

To order memorial trees or send flowers to the family in memory of Danton A. Doner, please visit our flower store.