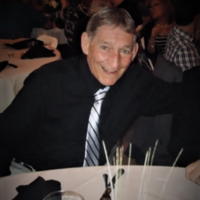 ENOSBURG FALLS–  On September 26, 2021, surrounded by his family, David James Garrow, our strong-willed and loving husband, father, and grandfather, left this world.

He was born on March 20, 1941 to James Garrow and Marguerite (Fortin) Garrow. He graduated from Enosburg Falls High School in 1959. On August 10, 1974 he married Monica (Dulude) Garrow. Monica and Dave moved to Milford, Connecticut for 8 years before returning to Enosburg Falls. Together they had three daughters, Kristi, Kylene and Kelli.

David served in the United States Army from 1962 to 1968. He was also a proud member of the American Legion Post #42 in Enosburg for 40 years. He worked for 25 years alongside his brother-in-law Kevin Dulude at Kevin’s Korner Store in Enosburg Falls. His time working at the store provided the opportunity for him to meet so many wonderful people in the community, many of whom would become life-long friends.

Sports were a huge part of his life. He played for the Dulude’s Body Shop softball team and several other baseball and softball leagues throughout the years. He loved to share stories of his “softball days,” and if you asked him, he would proudly tell you he was one of the greatest pitchers of all time. He enjoyed bowling for the Enosburg Dairy Center men’s league for many years and would often brag about his score. He was a die-hard sports fan of the New York Yankees, UCONN Huskies, and the New York Giants. Dave enjoyed watching his grandkids play sports and loved taking them to the baseball fields to “teach them a thing or two” about the game. Over the last several years, he found a new competitive sport to enjoy with his family, cornhole, and of course he thought he was the one to beat.

Above all else, he is survived by his loving wife, Monica (Dulude) Garrow and his three devoted daughters Kristi Garrow and her partner Chris Spears of Saint Albans and his daughter Madisyn, Kylene (Garrow) Flowers and her husband Kyle of Enosburg Falls, and Kelli Garrow and her partner Stephen Trombley of Enosburg Falls. He was a proud “Papa” to his 6 grandchildren, Averi and Brady Cutting, Thalen and Grayson Corrigan, Kayah Garrow and Freya Trombley. He also leaves behind his brother John (Brent) Garrow and his wife Glenda of Sheldon, VT. David will be missed by his many nieces, nephews and friends. In addition to his family, he leaves behind Jeter, his beloved cat.

He was predeceased by his parents, his sister Jan (Garrow) Newell, as well as his in-laws Jinny and Jerry Dulude.

The family wants to express deep appreciation and gratitude to UVM Hospice and Elderwood at Burlington for their care and compassion over the last several months and in his final days.

Friends and family are invited to David’s life celebration on Saturday, October 2, 2021 to include a memorial service at Noon along the Missisquoi River with a reception to follow at the Goss-Spears Life Celebration Home, 96 Dickinson Ave., Enosburg Falls.

For those who wish, you may make a donation in David’s name to the Alzheimer’s Association, VT Chapter at 75 Talcott Road, Suite 40, Williston, VT 05495.

To order memorial trees or send flowers to the family in memory of David J. Garrow, please visit our flower store.