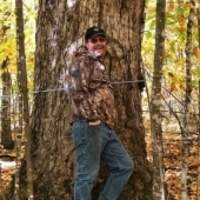 David attended Enosburg Elementary, Fairfield Elementary, and graduated from BFA St. Albans. After graduation he worked as a farmer, a mechanic, a snowmaker at Smugglers Notch for 15 years, and most recently a sugar maker on his own rig, a feat he was very proud of. He married Anne Raymond on August 30, 2014. Besides sugaring, David enjoyed fishing, hunting, and camping. He was known as being a Jack of all trades, master of none" and will be remembered by those who knew him closest as someone who loved to help others.

He is survived by the love of his life, Anne Button of Berkshire; son, Zachary Ryan Button Tallman of GA; step-children, Megan Gazaille and Kole Gazaille both of Berkshire; father, David Button Sr. and his wife Linda of Fairfield; sister, Laure Allard and her husband Jeff of Fairfield; step-siblings, Tammy Remillard and her significant other Randy of Milton, Dawn Menard and her husband Albert of Fairfield, and Charles Tinker Jr. and his wife Nicholle of Fairfield; brother-in-law, Jason Raymond of St. Albans; father and mother-in-law, Jerry and Sharon Raymond of St. Albans; his closest friend, Mike Menard of Fairfield, and many nieces and nephews. Besides his mother, Rita Fay, David was predeceased by his sister, Tammy Button; and brother-in-law, Jeremy Paul Raymond.

Visitation will be held on Friday at Spears Funeral Home from 1:00 PM until the hour of the service.

For those who wish, contributions in Davids memory may be made to Davids family to help with expenses, mailed to Spears Funeral Home, P.O. Box 396, Enosburg Falls, VT 05450.

Condolences, photos and favorite memories may be shared through www.gossfs.com
To order memorial trees or send flowers to the family in memory of David P. Button Jr., please visit our flower store.