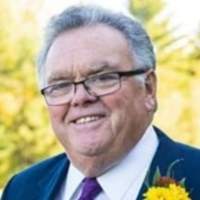 HIGHGATE -David F. Roddy, age 69, passed away unexpectedly on Tuesday, December 17, 2019 as a result of an automobile accident.

David grew up in Enosburg Falls and graduated from Enosburg Falls High School in 1969. While in school he
worked maintenance at EFHS, at the Enosburg Falls Country Club and at Buzzy Leach\u0027s farm. Upon graduation he joined the US Navy where he was crewed aboard the USS Fiske and stationed in Rhode Island for 4 years. While serving, he met the beautiful love of his life, Georgette Georgie Gagne and the two married on December 2, 1972.

After being discharged in 1973, the pair moved to Highgate to raise their 5 children. David joined the National Guard and began working for the State Highway Department until taking a job at IBM as a maintenance technician where he retired after 35 years all while maintaining a side carpentry business with his children that brought him years of enjoyment. After retirement and most recently, David could be found working for OC McCuin & Sons. David was a civic minded man and was involved with various town committees, volunteer work, teaching catechism, housing foreign exchange students, and serving on the School Board for a total of 29 years.

David was a proud family man, he never missed an opportunity to brag about his children or his grandchildren. There was not a family event, gathering, or activity that he missed. He was notorious for his famous hugs, inviting smile, and his ability to make friends wherever he would go. David enjoyed driving his RV, trips to Florida to visit his son where they had fun at Disney and Medieval Times, singing, dancing, impersonating Elvis, John Wayne, and Santa, taking Georgie out for their weekly movie dates, and doing anything else that he thought would make his wife happy. He had a generous soul, from helping out fellow coworkers to rushing to the local school to fix something, he would help anyone; no questions asked.

A funeral service will be held Monday, December 23, 2019 at 11:00 AM at Kidder Memorial Home with a reception to follow at the Highgate Elementary School gymnasium.

For those who wish, contributions in Davids memory may be made to Backpack Theater and The Travelling Story Teller, which were a very special part of David\u0027s life and the lives of his children and grandchildren. Or Make A Wish Vermont, as children were always a focus in David\u0027s civic mission. Checks can be made and sent to: The Travelling Storyteller, 188 Sheldon Heights, Sheldon, VT 05483.

Condolences, photos and favorite memories may be shared through www.gossfs.com
To order memorial trees or send flowers to the family in memory of David F. Roddy, please visit our flower store.