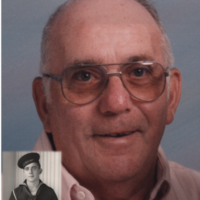 SWANTON – Donald G. Bell, age 97, passed away on Monday, January 24, 2022 surrounded by his loving family at his daughter’s home.

Don was a lifelong resident of Swanton and wore it proudly. He became an entrepreneur at the age of 11 as he acquired every paper route in town and paid other kids to work for him. Don continued with a strong work ethic and determination, which led him to success. He proudly enlisted in the United States Navy in 1943, served in World War II and was honorably discharged in 1946.  After returning home he started Riverside Service Station and subsequently Don G. Bell, Inc., owning and operating a fleet of school buses and “Swanton’s largest International Harvester truck dealership”.  On July 14, 1950 Don married Marie Beyor, his soul mate and the love of his life. They had two children who become the center of their life. Don and Marie enjoyed traveling with their family including annual trips to Maine to visit the beach, and the Fryeburg Fair. Don also enjoyed racing Trottingbred horses with son Donny and niece Melanie. They raced all around New England, New York and Canada for many years. Don enjoyed spending time with his children and beloved grandchildren and he and Marie were known for their love of dancing. Don was recognized by the Swanton Chamber of Commerce in 2002 as Swanton’s Citizen of the Year and has been a Mason with the Swanton Masonic Lodge for 76 years. He loved having breakfast each and every morning with “the boys” downtown, catching up on the latest gossip. Don was a friend to many and will be greatly missed.

He is survived by his daughter, Linda L. Bell of Georgia; son, Donny Bell and his wife Sherry of NH; grandchildren, Brandon Bell of NH, Sadie Fitzgerald and her significant other Matt Taylor of MD, Conor Bell and his fiancée Jess Treanor of NH, and Kyle Fitzgerald of Georgia; and several nieces and nephews. Besides his parents, Don was predeceased by his wife, Marie Bell on February 14, 2021; siblings, Walter Bell and his wife Fay, and Bernice Lorah and her husband Mac.

A Life Celebration will be held this spring and will include a graveside service with military honors in Riverside Cemetery in Swanton.

To order memorial trees or send flowers to the family in memory of Donald "Don" G. Bell, please visit our flower store.