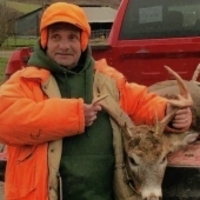 He was born October 17, 1948 in Montgomery to the late Archie & Adeline (Lumbra) Domina.

Donald grew up in Montgomery and attended Montgomery Elementary School and later graduated from Enosburg Falls High School in 1966. On November 25, 1967 he married Penny (Kellogg) Domina. He had many jobs throughout his life including asbestos mining, excavation and construction, and farming, until he started his own business, Don Domina Contracting. Donald enjoyed deer hunting, fishing, watching NASCAR every Sunday, working, raising beef cattle with his sons and grandsons, and spending quality time with his cherished family. He will be remembered for his incredible work ethic, sense of humor, his ability to put others first, but most of all his kind and generous heart.

He is survived by his wife, Penny Domina of Eden; their children, Donald Domina Jr. and his wife Laurie of Highgate, Ken Domina and his wife Angie of Eden, Paula Bidwell and her husband Seymour of Oklahoma, Gerald Domina and his significant other Donna Bennion of Enosburg, and Amy Domina of Johnson; his grandchildren, April, Donald III, Amber, Miranda, Levi, Selena, Autumn, Ashley, Adeline, Gerald M., Dominick, Logan, and Maddison; and his great grandchildren, Holden, Quinn, Tucker, Jaden, Gabrielle, Caleb, Alyx, and Braelyn. Besides his parents, Donald was predeceased by his brothers; Archie and Gary Domina; and his uncles; Arnold Lumbra, Donald & Gerald Domina.

A funeral service will be held Tuesday, November 13, 2018 at 11:00 AM at Spears Funeral Home, 96 Dickenson Ave., Enosburg Falls. Interment will follow in Montgomery Center Cemetery

For those who wish, contributions in Donalds memory may be made to Lamoille Area Cancer Network, 198 Farr Avenue, Morrisville, Vermont 05661.

Condolences, photos and favorite memories may be shared through www.gossfs.com
To order memorial trees or send flowers to the family in memory of Donald R. Domina Sr., please visit our flower store.