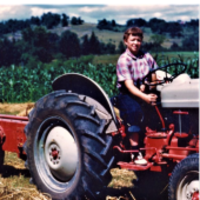 She was born in St. Albans on February 9, 1936, the daughter of the late Donald and Anna Jane (Nowland) Paradee.

Dora began milking cows at four years old and continued to milk and love her cows for 80 years. Dora lived her creed that working hard is the foundation of life. She remembers hitching the team of horses to the manure wagon, filling it and then shoveling the manure onto the field twice a day. Strong willed, and independent she was blunt and determined to run her farm before women farmed alone. After her fathers death in 1973 she farmed with her mother for 20 years and then independently, with the help of her friend Brad Callan for nearly 30 years. Dora loved her cows like they were her family and felt tremendous pride in their productivity. She was known at farm auctions for only buying black cows. She deeply felt that her farm and land were part of her. She conserved her farm to ensure that the land would remain in agriculture.

An exceptional horsewoman, Dora is fondly remembered by older residents of Fairfield riding horses with her mother around the loop from the Paradee Road to the North Road and home again after chores every night. In additional to her cows, Doras other passions were the Boston Red Sox, cats, and playing cards. Hidden generosity was part of Dora. She was always there with a generous donation when tragedy struck her neighbors.

A special thank you would like to be extended to Lynn McMorrow FNP-C, DNP and Franklin County Home Health Hospice Program for the special care Dora received.

She is survived by her sister Mary Jane Boudreau and her husband Richard of Franklin; brother, Tom Paradee and his wife Ellen of Fairfield; special friends, Brad Callan, and Steve Wadsworth; and several nieces and nephews. Besides her parents, Dora was predeceased by two brothers, William, and Fredrick Paradee.

A funeral service will be held on Saturday, August 22, 2020 at 11:00 AM at Spears Funeral Home, 96 Dickenson Ave., Enosburg Falls, VT. Interment will follow in the Sheldon Village Cemetery, Pond Road, Sheldon, VT.

For those who wish, contributions in Doras memory may be made to the American Cancer Society, Northern New England Region, P.O. Box 1460, Williston, VT 05495.

Condolences, photos and favorite memories may be shared through www.gossfs.com
To order memorial trees or send flowers to the family in memory of Dora E. Paradee, please visit our flower store.