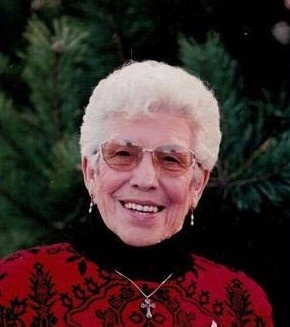 ENOSBURG– Edith Fiske, age 96, died peacefully at her home surrounded by her loving family on Saturday, June 18, 2022, after a short period of declining health. She was born in Sheldon Creek, on August 5, 1925 to Anthony and Eva (Machia) Burns.

Edith grew up in a large family in Sheldon Creek, where she attended her first two years of high school. The last two years were at Brigham Academy in Bakersfield where she graduated in 1944. She then married Charles Fiske on August 5, 1944. She was a devoted wife to Charlie, and mother to their six children while living on a farm in Fairfield. Edith spent much time in the kitchen baking and cooking. She was noted for her delicious doughnuts which drew the attention of neighborhood kids and workers coming in from the hayfield to the barn during the summer months.

Edith and Charlie loved and guided their children in making important life decisions. They took great pride in watching their children attain their chosen careers: a nurse, a teacher, a dairy farm owner, a US Navy retiree and two sons in careers of electronics.

She was always looking to advance her life to the exciting unknown. While her family was young, she drove a station wagon full of children back and forth to high school in St. Albans from Fairfield. When her youngest was ten years old, she began her love for nursing and worked the night shift at Loch Haven Nursing Home in Jeffersonville while her family slept. From there, she worked at Isham Manor, in St. Albans, and truly enjoyed caring for her patients. All this time she hoped to someday go to nursing school, however, her husband and family came first, and she chose not to pursue it.

She left nursing in 1971 to work at the St. Albans Messenger newspaper as a linotype operator and as a proofreader. In 1981, she became the co-owner of a business in Enosburg Falls, called “Edi’s Restaurant,” where her cooking skills became public, and the restaurant flourished. She later partnered with her daughter, Susan, owning and managing a community care home in Richford for several years. The Cablevision business in Enosburg was her next venture, helping in the office for fourteen years. Until this last December, she had a recipe column in a Vermont antique car club monthly publication of which she proofread for twelve years.

She had many good friends as she settled in Enosburg. Dairy Town clogging, bowling, golfing, and playing cribbage and 500 in local card clubs were some of the activities that she participated in and enjoyed very much. The family 500 card club was her favorite monthly activity. She especially liked going to the casino on occasion with Pat. At home, she settled in her chair with her two cats, Burke and Missy by her side watching as she was either knitting or crocheting a special creation for her great-granddaughters. She was a communicant of St. John  the Baptist Church and enjoyed baking her special pies for the parish priests. You could see her still driving her black Subaru in Enosburg up until a month or so before her passing.

It was evident that Edith was the hub of her family and she lived for them and loved them all very much. Mom, Mother, Grandma, Grandma-Great will be dearly missed but never forgotten.

The family extends their thanks to the Hospice staff for the special care, support, and services provided to Mom and to her children.

Family and friends are invited to Edith’s Life Celebration events which include visitation on Monday, June 27, 2022, from 4:00-7:00PM at the Goss-Spears Life Celebration Home, 96 Dickinson Avenue, Enosburg Falls, VT. A Mass of Christian Burial will be held on Tuesday, June 28, 2022, at 10:00AM. at St. John the Baptist Catholic Church, 222 Missisquoi St, Enosburg Falls.

For those who wish, contributions in Edith’s memory can be made to the Berkshire Center Cemetery, c/o Gary Fiske, 2503 Duffy Hill Road, Enosburg Falls, VT 05450.

To order memorial trees or send flowers to the family in memory of Edith M. Fiske, please visit our flower store.