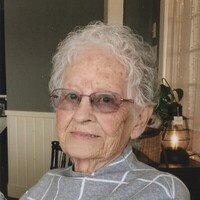 Ellenor grew up in West Charleston and married Richard “Dick” Powers on August 23, 1958. In addition to raising their five children, Ellenor worked alongside Dick on the family farm. Through farming, she fell in love with horse pulling. Ellenor and Dick were a stable at every horse pull in the area, and she was always on the edge of her seat watching, just as if she was driving the horses. Ellenor enjoyed shopping, especially for clothes, and as her children and grandchildren will tell you: she never had enough! She also loved going out to eat and could be found alongside Dick at Chester’s in Fairfield on most afternoons. Above all, Ellenor lived for her family. She was a wonderful mother, grandmother, and great grandmother. Wherever her family was, you could bet that Ellenor would be there – especially if it included a trip out to Oklahoma!

She is survived by her children, Donna Vaillancourt and her husband Patrick of Enosburg, Dale Powers of Berkshire, Diane Therrien and her husband Michael of Enid, OK, and Debbie Marshall of St. Albans; grandchildren, Jason, Kelli, Jeremy, Connor, Shannon, Aaron, Amber, Jennifer, and Eric; great-grandchildren, Emma, Charles, Kase, Tristian, Tagen, Makenna, Sisi, Carsyn, Ariel, and Ryker; brothers and sisters-in-law, Norman Powers, his wife and Ellenor’s BFF, Sue of CT, Robbie Powers and Jetta of VA, Jane Moulton and Terry of Orleans, and Jane Benson of GA; a special nephew, Brian “Buzzy” Webster; many other nieces and nephews and her friend and roommate, Barb. In addition to her parents, Ellenor was predeceased by her husband, Dick Powers; her son, Dwight Powers; siblings, Rodney Royce, and Cynthia Morse; brothers and sisters-in-law, Dale Powers, Larry Powers and his wife Jan, and Dick & Charlotte Webster, Ellenor thought of Charlotte as her sister.

Ellenor’s family would like to extend a heartfelt thank you to the nursing staff at Franklin County Health & Rehab for the wonderful care she received, and to her special friend and hairdresser, Sue Paquette.

In keeping with Ellenor’s wishes, there will be no public services. Ellenor and Dick will be laid to rest together in West Charleston this spring.

For those who wish, contributions in Ellenor’s memory may be made to Franklin County Home Health Agency, 3 Home Health Circle, St. Albans, VT 05478.

To order memorial trees or send flowers to the family in memory of Ellenor A. Powers, please visit our flower store.