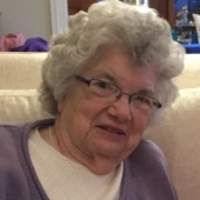 SWANTON - Mrs. Elvy H. Kidder, 90, a lifelong resident of this community, passed away Thursday, January 23, 2020 at the Northwest Medical Center in St. Albans.

Born in St. Albans August 31, 1929 the daughter of the late Horace W. and Elbie (Hart) Hubbard, Elvy was raised on the original Hubbard farm on the Highgate Road in Swanton known as the Circle J. She received her elementary education in a one room schoolhouse down the road from the farm and was a graduate of Swanton High School. On June 16, 1950 she was married to Wesley F. Kidder and together they raised their three children in Swanton.

In 1951 Elvy graduated from the University of Vermont with a Bachelor of Science degree in Home Economics and began a nearly 40 year career as a Home Economics teacher, first at Swanton High School and later at BFA St. Albans and Missisquoi Valley Union High School. During these years Elvy also assisted her husband, Wes in the operation of Wood and Kidder Inc. in St. Albans and later at Kidder Memorial Home and quietly supported many community and church organizations. She served on the Swanton School Board, was a member of Nativity/St. Louis Parish in Swanton and Highgate and was a frequent summer communicant of St. Annes Shrine in Isle La Motte.

Elvy was first and foremost a devoted wife, mother, mother-in-law, grandmother and great-grandmother. She was a homemaker in the truest sense of the word not only in the care of her family but in teaching countless students the skills to build loving families, homes and communities.

She was predeceased by her husband Wes on December 20, 2012, her son, George Horace Kidder on April 17, 2002 as well as her brother and sister-in-law; Harvey and Sadie Hubbard, her sisters-in-law and brothers-in-law; Dorothy and Bob Bliss and Alan and Kay Kidder and by a nephew, Robert George Bliss.

Elvys family wishes to extend our deepest gratitude to the staff, nurses and aides at Homestead in St. Albans and the wonderful friends with whom she dined each day, her special caregivers, Carole Covely, Michaela Flint, Judy Bushey and Moe Mapes, the doctors and nurses at the Northwest Medical Center in St. Albans and Dr. Mark Pitcher and Dr. Ed Terrien. Over the years and especially these last few, you helped her to enjoy life feeling safe, happy and loved.

A Mass of Christian Burial will be celebrated Saturday, February 1, 2020 at 10 AM from St. Louis Roman Catholic Church on Lamkin Street in Highgate Center. Interment will follow in the Kidder Family Lot in Riverside Cemetery in Swanton.

Friends may call at the Kidder Memorial Home, 89 Grand Avenue in Swanton on Friday from 4-7PM.

Condolences, photos and favorite memories may be shared through www.gossfs.com
To order memorial trees or send flowers to the family in memory of Elvy H. Kidder, please visit our flower store.