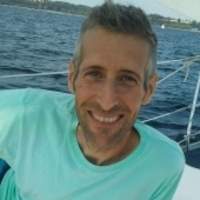 ESSEX - Held in the love and care of his family and friends, Eric Richard No«l, 43, of Essex, VT died peacefully in his sleep at the UVM Medical Center on December 18, 2018, ending his year-and-a-half journey with cancer.

He never used the word fight to describe how he faced his disease, instead preferring to say that he met this part of his life determined to give and receive love, support, and release. This wise, peaceful, courageous perspective is a gift he leaves to his wife of eighteen years, Hannah (Lambert) No«l, their children, Madeleine (14) and Calvin (12), and to all who knew him or who are touched by his story.

Eric was born in St. Albans, VT on June 22, 1975, the son of Richard J. and Marguerite L. (Rainville) No«l. He grew up on the family farm on Gore Road in Highgate with his siblings, Norbert and Sarah, where a deep love of the land was instilled in him. He attended local public schools, graduating from Missisquoi Valley Union High School District 7 in 1993, and then attending Vermont Technical College where he studied Automotive Technology.

Eric and Hannah first met in elementary school, and they displayed their sixth-grade class picture at their wedding reception on August 12, 2000. The photograph shows them standing side-by-side amongst other children, smiling but innocently oblivious to the love story theyd grow up to live out once Hannah returned to northern Vermont after moving away during childhood. And what a love story it was! Theirs was a marriage others admired for its easy companionability, its true sense of devotion and partnership, and its abiding commitment to living out their dreams and their values, together. They wed in the front yard of the No«l Family Farm, Erics family farm, with guests seated on hay bales, vows they wrote themselves, and a playful, celebratory recessional to the Peanuts theme song in acknowledgement of their childhood acquaintance.

Soon after they married, Hannah and Eric moved to Indiana to pursue Erics lifelong dream of working on racecars. They lived there for two-and-a-half years, and the excitement and camaraderie of the pit crew was something Eric would always treasure. But, a desire to live closer to family and to the landscape that nurtured them both as children led Eric and Hannah back to Vermont in 2003 as they envisioned raising a family. They moved in with Erics parents, and their daughter, Madeleine Elizabeth (named for Erics grandmothers and Hannahs mother) was born at home the next year, with Eric catching her under a midwifes care. Son, Calvin Jean-Maurice (named for Erics paternal grandfather), came along two-and-a-half years later, with Eric delivering him at home before the midwife arrived.

Fatherhood was the very core of Erics life. He delighted in seeing his children grow up as he cheered on Maddys gymnastic feats and basked in Calvins own joy as a kart racer and ice hockey goalie. His love for them and his hopes for their futures also fueled his devotion to healing the land that he worked as a farmer, and to educating countless people about soil science and sustainable practices. He wanted to give his children, and all children, the inheritance of a clean, healthy, sustainable environment. Together with Hannah, Eric ran a certified organic CSA farm, Maplewood Organics, on his familys land, starting in 2004. They raised and sold organic produce, eggs, chickens, and beef cattle, while homeschooling their children and participating in local, regional, and national efforts to promote land stewardship. Erics knowledge about soil science, in particular, was something he passionately shared with others as he practiced diversified farming and grazing management techniques all aimed at rebuilding topsoil and healing the land.

The family moved on to a new project in South Hero, VT, Health Hero Farm, in 2013 and continued their work as organic farmers while their children transitioned into public school. At this time, Eric also began looking into other ways of sharing his knowledge and encouraging others in their paths. He decided to pursue a career as a life-coach and worked independently to develop this business. Then, in 2017 he found an opportunity too good to pass up and he signed on to be part of the founding team at BETA Technologies, where he helped to imagine, create, and fly the worlds largest zero carbon emission aircraft. The prototype vertical takeoff aircraft first flew in Burlington, VT less than a year later, and the company plans to develop a fleet of aircraft capable of delivering life-saving organs to transplant recipients. Eric provided inspirational vision, he constantly pushed the limits of the possible, he helped form the culture of the team, and he drove the new technology to unbelievable heights. Erics friends and colleagues at BETA continue to find inspiration in his spirit every day. When the aircraft that Eric helped create earns a spot in the Smithsonian Air and Space Museum, his name, creation, and his signature will be proudly displayed on the fuselage, a testimony to his soaring intellect, inspiring vision, and love for all living things.

Eric, whose very surname, No«l, means Christmas in the French language of his Qubcois ancestors, had hoped to come home from the hospital to spend one more Christmas with his family. Its a heartbreak that this didnt come to pass, but a line of the old carol God Rest Ye Merry Gentlemen can serve as testament to what Eric wished to give us all as he left this world. The lyrics speak of tidings of comfort and joy upon the birth of the Christ child, but Eric expressed those same tidings as he accepted his release into death: Toward the end of his life, Eric often spoke of how his experience of suffering helped him recognize and appreciate the purity and simplicity of true joy. He wanted so badly to lift up humanity and teach people how to transcend the oppressive
assumptions and worldviews that harm us, and to embrace joyfulness. We who love him hold that message in our grieving hearts, determined to take joy and give comfort, to give joy and take comfort, and wishing this beloved, most gentle man rest, at last.

Eric is survived by his beloved wife, Hannah (Lambert) No«l, and their two children, Madeleine (14) and Calvin (12), of Essex, VT; his parents, Richard John No«l and Marguerite (Rainville) No«l, of Highgate Ctr., VT; his sister, Sarah No«l Larose, and her fianc, Gordie Richard of Franklin; his brother, Norbert John No«l, and wife, Sharon, of Oakridge, NJ; his sister-in-law and her husband, Heather and Brian Bessette of Highgate Ctr., VT; his brother-in-law, Jeffrey R. Pignona, of St. Albans, VT; his sister-in-law, Hilary Lambert, of Proctor, VT; his nieces, Adeleine Larose, Bailey No«l, and Alice Bushee; his nephews, Jake and Hunter No«l, Sawyer and Jeffrey R. Pignona, Jr., Ryan and Brendan Bessette, and Mason Bushee; his parents-in-law, Elizabeth Clark Miller and her husband, John, of Proctor, VT, and Edward Lambert and his partner, Susan, of St. Albans, VT; and by many aunts, uncles, and cousins, and a wide circle of friends. Eric was predeceased by his paternal grandparents, John Maurice No«l and Madeleine (Viens) No«l, and his maternal grandparents, Norbert Rainville and Madeleine (Bouchard) Rainville.

A celebration of life will be held for Eric in June of 2019.

Those who so desire may make memorial donations in memory of Eric to VGFA - Eric Noel Fund, c/o UVM Extension, 327 US Route 302, Suite 1, Barre, VT 05641. Checks may be made out to: Vermont Grass Farmers Association. Eric was an accomplished and remarkably skilled grazier, and generously shared his learning by teaching and supporting other graziers. The Eric Noel Memorial New Grazier Fund is established to carry on his work by supporting the training and peer-to-peer learning of grass farmers in Vermont and beyond.

Condolences, photos and favorite memories may be shared through www.gossfs.com
To order memorial trees or send flowers to the family in memory of Eric R. Noel, please visit our flower store.