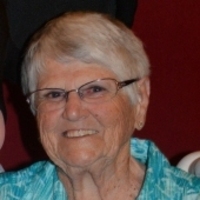 NORTH HERO - Evelyn G. Dubuque, age 93, passed away on Sunday, September 29, 2019 at the UVM Medical Center in Burlington surrounded by her loving family.

She was born in North Hero on October 22, 1925, the daughter of the late Ira and Edith (Mott) Curtis.

Evelyn grew up in North Hero and graduated from Alburgh High School. After graduation, she met and married Richard Dubuque Sr. on March 27, 1946 and the two started and raised their family in North Hero. Evelyn and Richard owned and operated the Dubuque family farm until the late 60s, and they worked for the North Hero School District until they both retired. She was a member of the Alburgh American Legion Auxiliary, and a past president for the Islands in the Sun Senior Center where she helped run and deliver Meals on Wheels, and organize touring bus trips, and trips to casinos where she could be found playing her favorite slot machines. Evelyn enjoyed playing bingo, watching her favorite sports teams: the Boston Celtics and the Red Sox, and collecting pens for her notorious collection. Her family and friends were the center of her life and she cherished the time she spent with them. Along with her witty and fiery personality, Evelyn will be remembered for her warm loving heart and her beaming smile.

Evelyns family would like to thank the UVM Medical Center Intensive Care Unit doctors, nurses, and staff for the outstanding care she received.

For those who wish, contributions in Evelyns memory may be made to the American Legion-Post 60, P.O. Box 158, Alburgh, VT 05440 and/or the Alburgh Fire Department, 60 Firehouse Rd, Alburgh, VT 05440.
\t
Condolences, photos and favorite memories may be shared through www.gossfs.com
To order memorial trees or send flowers to the family in memory of Evelyn G. Dubuque, please visit our flower store.