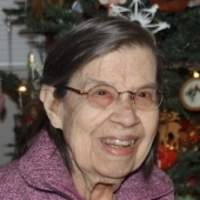 She was born in Waterford, Vermont on April 7, 1922 to the late Ralph and Laura (Haire) Comings.

Florence attended colleges in Alaska, New Mexico and Ohio, earning a bachelors degree in Modern Languages and later earning her masters degree in Library Sciences. She was a member of several organizations, including the 251 Club, the All Fifty States Club and the Smithsonian. She took pleasure in traveling and was an avid reader. Florence served in the United States Marine Corps during World War II.

She is survived by her three children, Lucinda Vavoudis of Arlington, VA, Arthur Vavoudis of East Windsor, CT, Christina Little and her husband, David, of London, England; and many nieces, nephews and cousins. Besides her parents, Florence was predeceased by her brother, Norris Comings.

A funeral service will be held on Friday, May 10, 2019 at 11:00 AM at Spears Funeral Home, 96 Dickenson Ave., Enosburg Falls, Vermont. Interment will follow in Montgomery Village Cemetery.

Visitation will be held on Friday, at Spears Funeral Home from 10:00 AM until the hour of the service.

For those who wish, contributions in Florences memory can be made to the Montgomery Historical Society, P.O. Box 47, Montgomery, VT 05470.

Condolences, photos and favorite memories may be shared through www.gossfs.com
To order memorial trees or send flowers to the family in memory of Florence "Connie" (Comings) Vavoudis, please visit our flower store.