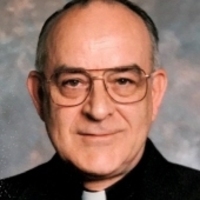 His diocesan responsibilities included Diocesan Personnel Board, Spiritual Director of Cursillo, and Chaplain to the Boy Scouts of America. Fr. Laroche was also a member of the Knights of Columbus, he received his Fourth Degree.

A Mass of Christian Burial will be celebrated on Tuesday, February 26, 2019 at 11:00 AM at Nativity of the Blessed Virgin Mary Church, Canada St., Swanton with Bishop Christopher J. Coyne as principal celebrant. The Homilist will be Reverend Andrew Vill. Interment will follow in St. Louis Cemetery, Lamkin St., Highgate Center.

Viewing will take place on Tuesday at Nativity of the Blessed Virgin Mary Church from 10:00 AM until the hour of the Mass.

For those who wish, contributions in Fr. Laroches memory may be made to a charity of your choice.

Condolences, photos and favorite memories may be shared through www.gossfs.com
To order memorial trees or send flowers to the family in memory of Fr. Leonidas B. Laroche, please visit our flower store.