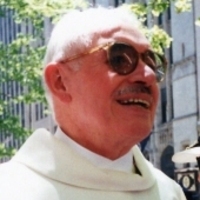 Raised in Far Rockaway, NY, Gabe graduated from St. Mary Star of the Sea grammar school in 1940, then Bishop Loughlin Memorial High School in Brooklyn, NY in 1944. After high school, Gabe served in the U.S. Navy in the Pacific Theater on Guam. He received his honorable discharge, in May of 1946, with the rank of Storekeeper IIc. After returning home, he earned a bachelors degree in English from Fordham College, and later attended the New York University Graduate School of Business. Gabe worked for General Motors in their Overseas Operations and retired in 1978.

The Mass of Christian Burial will be held Friday, January 4, 2019 at 11:00 AM at Holy Angels Catholic Church, 241 Lake Street, St. Albans, VT 05478. Interment will be held this spring in St. Patrick Cemetery, Church Road, Fairfield, VT.

For those who wish, contributions in Gabes memory may be made to Holy Angels Church, 246 Lake Street, St. Albans, VT 05478.

Condolences, photos and favorite memories may be shared through www.gossfs.com
To order memorial trees or send flowers to the family in memory of Gabriel M. Liegey, Jr., please visit our flower store.