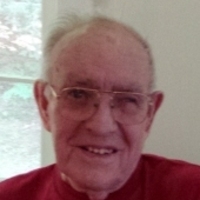 SHELDON" George Kane completed his earthly chores on August 19, 2020 at the Franklin County Rehabilitation Center in St. Albans. He was born September 15, 1923 in Ste. Seraphine, Quebec to the late Roscoe P. Kane and Imelda Gervais Kane. He immigrated to Vermont when he was four and grew up and farmed in Sheldon, Vermont for all of his working life.

George was a loving father and husband and lived a long and rich life, filled with family and friends. He lived life with enthusiasm and kindness and was relied on for his good judgment. He loved his dairy farm; sugaring; dancing; parties; singing; jokes; playing his harmonica; building things and fixing all things mechanical. He was very proud of the log cabin he built on Lake Carmi. He was community-minded and served on the Sheldon School Board for more than 20 years, and was a member of the Enosburg Lions Club, manning the animal barn at the Dairy Festival for many years. He helped out at Franklin County field days and was active at St. John the Baptist church in Enosburg. He helped with Habitat for Humanity and in the Hickory Hills community when he spent winters in Inverness, Florida. George was awarded the Melvin Jones award by the Lions Club and was awarded the Citizen Volunteer of the Year by Governor Howard Dean.

George had to assume farm responsibilities at an early age so did not have opportunity to get the education he would have liked. As a result, he was determined that his children would get the opportunities he could not. He was proud that they were able to attend and graduate from college. This belief in the importance of quality education was influential in his decisions on the Sheldon School Board and from which the local children greatly benefitted. Many others were also helped by his kindness and interest, including several young people whom he adopted or hired on the farm as a way of helping them out. He considered them all family.

In lieu of flowers, please consider a contribution to Franklin County Home Health, 3 Home Health Circle, St. Albans, VT 05478, who enabled George and Rolande to stay in their home for many years, or the Enosburg Lions Club, P.O. Box 565, Enosburg Falls, VT 05450, or just extend an act of kindness in Georges memory.

To order memorial trees or send flowers to the family in memory of George R. Kane, please visit our flower store.