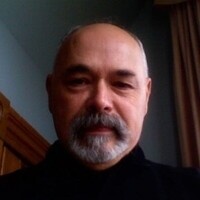 franklin – george raynak passed away on december 10th. he is survived by his daughter, jennifer, son, geoffrey, daughter-in-law gretchen, and two grandchildren, quinn and dylan.

george was born in newark, new jersey and earned his bachelors of science at clark university. he married becky irish and spent most of his adult life in franklin, vermont. over the years, george enjoyed frequent trips to oregon to visit and travel with his kids and grandkids. he supported all of their interests without constraint and shared interests in art, design, books, movies, sci-fi, cars and all things tech. (george and jen exchanged no less than 200 texts during the first space-x docking alone.)

after a brief stint doing background investigations for mayor lindsay in new york city, he assumed a career as a dhia milk tester in enosburg.  it was a nearly 20 year career where he supported dozens of farms and farmers that he considered his extended family.  as early as the mid-1980s, he was trying to push the technological limits of 300baud modems and data transfer to help improve that industry.

having spent his childhood fascinated with ‘50s depictions of computers and robots, the first ‘modern’ computer in his home was an apple II+, which joined the family in the early ‘80s.  it did not have a shift key or caps lock.  a fact that was never overlooked in his communication style (and in this homage to his rich life).

he was also a devout tinkerer, never without a “project”. every inch of his home is a tribute to his desire to learn and build. from plumbing to painting to 3d printing to playing the bass, he was always exploring new pursuits. the diversity of his library speaks to a mind eager for ideas. and there was always a vintage car in the mix; even a few that ran.

george dedicated his career to improving education with technology, serving as the first technology director at franklin northwest supervisory union from 1997 until his retirement in 2018. his claim to fame was that the nucleus for that job materialized as a result of the grateful dead wanting to hold a concert at the franklin county fairgrounds. the concert demands would have conflicted with mvu graduation; so in exchange for postponing the high school graduation, the dead donated money and computers to form the first computer lab at mvu, a tie george never tired of. figuratively, and literally. he totally had a grateful dead tie that he would wear to work.

his efforts to solve complex technology problems were tireless, and he was a leader in the technology field for fnwsu and around the state of vermont.  he was instrumental in developing vermont’s first technology curriculum.  he dedicated his time to support the teachers with the best technology of the time to create innovative and engaging lessons for students of all ages.  he was most proud, however, of his contributions to his ‘home’ school of franklin elementary.  his heart was always with these teachers and even more so with the kids. ‘hour of code’ was his favorite time of year.  a joy he continued even after retirement; a joy he shared with the students and teachers alike.

george was known as a deep and great thinker when it came to complex problem solving and always enthusiastic to share with his colleagues and students. he delighted in others' own grasping of a problem.  your 'aha' moment was george's too.

george had a gift for humorous observation and a minimalist, poetic touch to his words, art, and actions.  he hated capital letters, but loved life. he was a kid at heart who gave and loved generously. he will be missed dearly.

in lieu of gifts or flowers, his family requests that any donations be directed to the haston library in franklin in his name.  these donations can be mailed to haston library po box 83 franklin, vt 05457.

To order memorial trees or send flowers to the family in memory of george raynak, please visit our flower store.