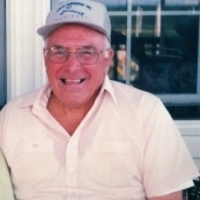 Born in Groton, Vermont on December 16, 1925, he was the son of the late George and Alice (Carr) Vance. He attended school at Bellows Free Academy in Saint Albans, joined the Army National Guard in 1943, went on to active duty in the United States Navy in 1944. On February 24, 1951 George married the late Lucille Hardy who predeceased him on October 10, 2006.

George was employed by Central Vermont Railroad as an Engineer, and after more than 30 years retired in 1985. He was a parishioner of the Memorial United Methodist Church of Swanton. In his spare time, he found enjoyment in auto body work serving the Swanton community. George enjoyed fishing and hunting, playing horse shoes and volleyball. George and Lucille would pack up the camper and travel to Lake George and various other campgrounds with their children. He cherished his family, his children, grandchildren and great grandchildren.

George is survived by his sons, George and his wife, Robyn of Highgate, Jeff and his wife, Cheryl of Georgia, grandchildren, Tracy, Kaylee, Stephanie, Amanda, Chad and Steven, and great grandchildren Montana, Savannah, Elizabeth, Lindsey, Mackenzee, Brad and Zakyia. Brothers, Stewart and Richard Vance, daughter in law Donna Vance and Carlotta Vance. He was predeceased by his sons, Randall and William, as well as his brothers Hollis and Billy and sister, Anita.

A Funeral Service will be held on Friday, September 28, 2018 at 11:00 from the Kidder Memorial Home, 89 Grand Avenue, Swanton. Prayers of Committal and Military Honors will follow in the Vance family lot in Riverside Cemetery.

Relatives and friends may call at the funeral home on Thursday from 5-7 PM.

Gifts in George\u0027s memory may be made to the Franklin County Home Health Agency, 3 Home Health Circle, Saint Albans 05478.

A reception will follow the services at 141 Grand Avenue, Swanton.

Condolences, photos and favorite memories may be shared through www.gossfs.com.
To order memorial trees or send flowers to the family in memory of George R Vance, Sr., please visit our flower store.