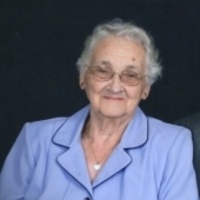 HIGHGATE - Georgette L. Gagne, age 89, departed this earth on November 7, 2019, embraced by her family, and is now at peace in the arms of her heavenly Father.

Georgette was born on April 6, 1930 in Swanton, the daughter of Pierre and Aurore (Bourgea) Larose. She lived in Swanton and graduated from Holy Angels School in St. Albans, VT. She began work immediately upon graduation at the Fonda Container and worked there from 1945 to 1955. She married Normand Gagne of Highgate on September 4, 1954, who predeceased her on March 22, 2017. They lived in Highgate most of their 62 years of marriage and enjoyed life on the farm. No stranger to hard work and multi-tasking, she was successful in keeping home and farm well maintained while raising six children.

She is survived by her oldest brother Raymond Larose of Franklin, a sister Lorraine Rainville and husband Joe Rainville of Highgate, and sister-in-law Doris Larose of St. Albans. She was predeceased by brothers Bernard, Normand, and Robert Larose; and sisters-in-law Theda Larose, Denise Larose, and Marguerite Larose. She was predeceased by Normands family: Lucien and Dolores Gagne, Roger and Adrienne Gagne, Rosaire and Henriette Gagne, Alcide and Olivette Labrie. Her favorite past-time included spending time with family, playing cards, and reminiscing about good times past.

Georgette was a religious woman throughout her life and believed that prayer was the best medicine in helping to solve problems. She was a lifelong member of the St. Louis Church in Highgate, where weekly mass attendance was a must. She was an active member of the Ladies of St. Anne and often collected money for the annual Bishops Fund. She lived at the Homestead in St. Albans for the past three years, made many friends, and enjoyed the many activities offered.

She was a jack-of-all-trades in the house and on the farm. There wasnt any task she wasnt willing and able to tackle in the home or on the farm. She was a very dependable and capable farmwife often putting in 16-hour days. She loved maple syrup time and often supervised the firing of the stove to keep the sap boiling. She and Normand sponsored several Franco-American soirees in Highgate providing much enjoyed entertainment to family, friends and neighbors. She crocheted, sewed, dabbled in art, enjoyed puzzle-making and berry-picking, and loved playing cards with her siblings and board games with her children and grand-children. She always planted a huge garden and preserved what she could. Her grand-children and great grand-children will miss her gentle spirit, sense of humor, and wonderful cooking.

When she retired from farmwork, she was hired by the U.S. Immigration and Naturalization Service in St. Albans, where she was a records supervisor for ten years, admired for her strong work ethic and kind disposition.

The family wishes to thank all the employees and residents at the Homestead for their care and companionship during her time there. A special thank you to the Bayada staff and Homestead nurses for their special skills in providing comfort to Mama in her final days. And a thank you to all the relatives and friends who visited with her prior to her passing which meant the world to her.

Georgette was humble, frugal, and honest, and lived by examples of faith, hard work, responsibility, and thankfulness.

A Roman Catholic Memorial Mass will be held on Saturday, November 16, 2019 at 1:00 PM at St. Louis Catholic Church, Lamkin St., Highgate Center. Interment will follow in the St. Louis Cemetery in Highgate.

For those who wish, contributions in Georgettes memory may be made to the Ladies of St. Anne, St. Louis Church, c/o Betty Rainville, 4308 Morses Line Road, Franklin, VT 05457, or a charity of your choice.

Rest in peace Mama, you will be missed but never forgotten.

Condolences, photos and favorite memories may be shared through www.gossfs.com
To order memorial trees or send flowers to the family in memory of Georgette L. Gagne, please visit our flower store.