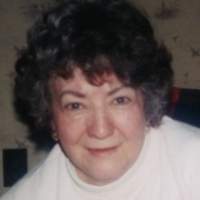 She was born July 5, 1939 in Fairfax to the late Howard & Agnes (Cotnoir) Garrett. She was the youngest of nine children.

Gyneth quit school and started working at an early age to help support her widowed mother. She married Roy Fortin in April of 1960. They made their home in Sheldon Springs with their two sons, Russell and Douglas. After raising her children, Gyneth went back to school and earned her GED. She worked in the hot lunch program for Sheldon Elementary School for eighteen years before retiring.

Her family meant the world to her. She enjoyed family dinners, holidays, camping at Fairfield Pond, and spending time with her grandchildren and great grandson, Everette. Gyneth also enjoyed playing card games, quilting, ceramics, making chocolates, decorating for Christmas, and a dirty joke or two. Gynie had many friends, one dearest to her was Aggie Churchill, they spent many times together, laughing and enjoying each other, Gynies and Aggies families became family. She will be greatly missed by her family and friends.

Gyneths family would like to thank the staff at the Northwestern Medical Center and Franklin County Rehab for the care she received.

For those who wish, contributions in Gyneths memory may be made to UVM Cancer Center, The Courtyard at Given, 4th Floor North, Burlington, VT 05405 or the American Heart Association, 110 Main Street Suite 203, Burlington, VT 05401.
To order memorial trees or send flowers to the family in memory of Gyneth M. Fortin, please visit our flower store.