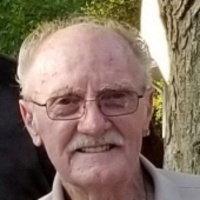 SWANTON - Harold A. Greenia, age 86, passed away peacefully on Saturday, July 18, 2020 at the Alburgh RV Park in Alburgh surrounded by his family.

Harold grew up in Highgate and joined the United States Air Force in 1951 and served until 1955. He served during the Korean War in Germany, Europe and attended school in California on the F-89 Scorpion Fighter Plane. When Harold returned from service, he worked for New England Central Railroad, and for the Sheldon Paper Mill. He earned his Master Plumbers License through a GI bill and later obtained his Journeyman Electrician License. He worked for J.A. Feeley & Sons in the early 1960s for 17 years, and for Chevalier Well Drilling company for 22 years. Harold loved bowling, the Boston Red Sox, camping and spending time with his family, friends and golden retriever, Bailey. Harold loved to keep busy and worked through his battle of cancer until this past Spring.

Harolds family would like to extend a special thanks to the Bayada staff, especially Lorraine, Tianna and Catherine for the exceptional care they gave to our Dad.

Visitation will be held on Monday from 12:00 PM until the hour of the service at Kidder Memorial Home.

For those who wish, contributions in Harolds memory may be made to the Franklin County Animal Rescue, 30 Sunset Meadows, St. Albans, VT 05478 or the American Cancer Society - Northern New England Region, P.O. Box 1460, Williston, VT 05495-4420.

Condolences, photos and favorite memories may be shared through www.gossfs.com
To order memorial trees or send flowers to the family in memory of Harold A. Greenia Sr., please visit our flower store.