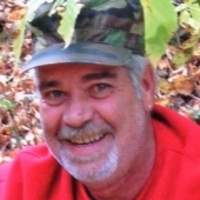 Harold was raised and attended schools in Enosburg Falls, he graduated in 1974. After high school he joined the Army National Guard. Harold spent time working as a carpenter, plow truck driver for the State of Vermont, the head of armories for Vermont, bus driver, the Richford golf course, and most of all helping others. On June 25, 1988 he married Deborah Patch. They lived in Enosburg, until moving to Richford in 2009 to live off the grid . He was a member of the Enosburg Falls Lions Club, a member and past commander of the Enosburg Falls American Legion, and a past volunteer for the Enosburg Fire Department. Harold served the communities of Enosburg and Richford in several capacities including, Village Trustee, Town Administrator and Select Boards. Harold enjoyed being outdoors, whether that was camping at Brookside, working on his tractor, four wheeling or snowmobiling, showing off his woods, or spending time hunting with his grandson Wyatt. He loved playing 500 with friends, attending his grandchildrens sports games, and his morning cup of coffee at Wetherbys.

He is survived by his wife, Deborah Foote of Richford; his children, Trish Adams and her husband Jerod of Berkshire, Isaac Foote and his wife Sara of Wellington, FL and Joel Paradee of Saratoga Springs, NY; grandchildren, Emily & Wyatt Adams and Ryker & Tenley Foote; sisters, Donna Cook and her husband Kenneth, and Terri Foote all of Enosburg; brother-in-law, Butch Patch of Swanton; sister-in-law, Nancy Patch of Burlington; several nieces & nephews; his beloved four-legged companion, Willow; and many friends. Besides his parents, Harold was predeceased by his grandsons, Brandon, Jacob & Parker Adams; his sister, Sheila Sheperd; his nephew, Chip Patch; his in laws Philip & Helen Patch.

A memorial service will be held Thursday, September 27, 2018 at 11:00 AM at Spears Funeral Home. Interment will follow in St. John the Baptist Cemetery in Enosburg Falls.

For those who wish, contributions in Harolds memory may be made to All Breed Rescue, Inc., 491 Industrial Avenue, Williston, VT 05495 or Whitetails Unlimited, C/O Franklin County Vermont Chapter, PO Box 125, East Otis, MA 01029.
To order memorial trees or send flowers to the family in memory of Harold C. Foote Jr., please visit our flower store.