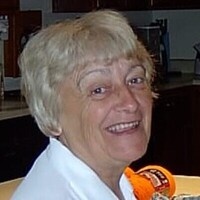 Hilda’s younger years growing up in Swanton were filled with cherished memories. Her joyful memory of her walks up street with her father, sharing father daughter moments. Along with the numerous stories she would tell of Mémère’s house and the fun times with Uncle Joe and Armede.

Her teen years were, roller skating at the Fantasia, rides around town. Stories of her driving, without a drivers license, while Gene slept. That was the extent of her bad girl days!

Her years at Swanton High continued to bring her great joy. She was a Swanton high, basketball star, which she took great pride in. She excelled in her business courses, while working in the school office. Her goal was to become a teacher.

She married the absolute love of her life in 1957 Gene Duprey. She would often recall him coming into her basketball games in his guard uniform taking her breath away. This love story gave them three children, seven grandchildren, and 10 greatgrandchildren. And a sixty-three years marriage.

Hilda and Gene spent countless hours riding. Day trips and Sunday rides to Highgate Springs. She enjoyed dancing, snowmobile riding, cruises, couples bowling leagues, trips to the casino. Gene telling her the entire two-hour drive let’s hope you win today Hilda. She also enjoyed the solitude of her flowers, but most of all the pride she had for mowing her lawn.

However, her biggest accomplishments in life, raising her three children, and taking care of Gene. Hilda was a nurturing, helping, strong willed woman. Time and time again, she would sacrifice herself, to provide serenity to family and friends.

The love story is now continuing in Heaven!

She is survived by her children, Patty Britch and her husband George of Highgate, Glen Duprey and his wife Kelly of Highgate, and Keith Duprey of St. Albans; grandchildren, Joe Britch and his wife Raven, Tyler Britch and his wife Cara, Justin Rushlow, Kaitlyn Duprey, Christopher Duprey and his significant other Jade Hotchkiss, Ryan Duprey, Andrew Duprey and wife Meghan Richard; 10 great grandchildren; sister, Annabelle Ellerin of St. Albans; cousin, Carlton Cotnoir; special friends, Lise Dexter of Highgate Springs, and Marilyn Livingston of Swanton; and several nieces and nephews. Besides her parents, Hilda was predeceased by her husband Gene Duprey on April 22, 2020.

A private graveside service will be held at the convenience of the family at Riverside Cemetery in Swanton.

For those who wish, contributions in Hilda’s memory may be made to the Vermont Cancer Society- Vermont, 55 Day Lane, Williston, VT 05495.

To order memorial trees or send flowers to the family in memory of Hilda L. Duprey, please visit our flower store.