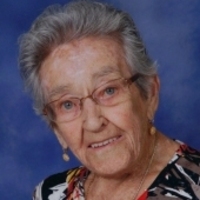 She was born in Fort Kent, Maine on April 19, 1925. She and her twin sister were the youngest children of Richard F. & Tilda (Moholland) Crocker.

Hope grew up in Fort Kent and graduated from the Madawaska Training School for teachers (now the University of Maine at Fort Kent) as part of an accelerated program designed to give students an opportunity to complete high school and receive teacher training in less time than usual as teachers were needed during the war.

She began her teaching career at the age of 19 and taught three years in the rural schools of the Fort Kent area. In 1945, Hope married Thomas R. Lancaster in Fort Kent. His career brought them to Vermont and her teaching career continued in Hartland and Stowe, where she taught fifth grade for 25 years, retiring from Stowe Elementary School in 1980. She was very proud to be from a family of educators: mother, father, siblings and then daughter, son-in-law, granddaughter and grandson-in-law. While living in Stowe, Hope coached high school girls basketball, attended the Stowe Community Church and was an active member of Sickle Chapter #34 Order of the Eastern Star. At the time of her death she was very proud to be a 68 year member of the Eastern Star, an organization that meant a great deal to her. Over the years, Hope was known for riding a bicycle wherever she went in town. Following the death of her husband in 1975, she learned to drive and always said she had to drive until late in life because she got such a late start!

In 1976 Hope married Elroy W. Towle in Stowe. Following her retirement, they began spending winters in Largo, Florida and summers in Eden, Vermont. This continued until after Elroys death in 2007. In 2012 she made Florida her permanent home and the Colonial Village community became her family.

Also surviving her are her step-children and their families, Mari Towle and Jerry Willert of Inverness, FL, Marjorie and Edward Andrus of Hyde Park, and El Towle and Joe Russo of Alburgh and several nieces & nephews.

Hope was predeceased by her parents and her husbands as well as her sister, Barbara Goodrich of Brewer, ME, her twin sister, Ann Marie Crocker of Fort Kent, ME, her brother, Richard F. Crocker, Jr. of Caribou, ME; nephew, Stephen Goodrich of Brewer, ME; and her childhood friend, Marcella Burns of Burlington, VT. Marcella and Hope both moved to Vermont through marriage and they maintained a close friendship.

A graveside service will take place on Saturday, August 4, 2018 at 10:30 AM in the family lot in Riverbank Cemetery in Stowe, VT.

For those who wish, contributions in Hopes memory may be made to the Lamoille Area Cancer Network, 198 Farr Ave., Morrisville, VT 05661. Hope received money from this special group of people when she battled cancer in Florida and she was always very grateful to them for reaching out and supporting her from home . For as long as she was able after her recovery, Hope knit and sold scrubbers and gave the money to this dedicated group as her way of repaying their kindness to her.

Condolences, photos and favorite memories may be shared through www.gossfs.com
To order memorial trees or send flowers to the family in memory of Hope L. Towle, please visit our flower store.