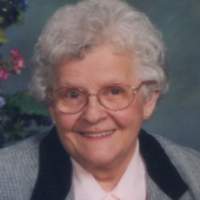 She was born October 29, 1925 in Black Lake, Quebec Canada the daughter of the late Louis Philippe & Emerentienne (Arsenault) Larochelle.

Huguette attended school in Black Lake and on June 26, 1948 married Marcel Barabe. Huguette & Marcel made their home in Berkshire where they owned and operated a dairy farm and raised their family. She was a member of All Saints Catholic Church where she also taught Catechism. She assisted with the French Program at Richford High School and then worked as the secretary for the Northeast Supervisory Union in Richford. Her many hobbies and interests included, painting, quilting, sewing, playing cards, cooking and most importantly spending time with her children and grandchildren.

She is survived by her children and their spouses, Lucie Price of Sacramento, CA, Francine & Robert Whitehead of Montpelier, John & Margie Barabe of Berkshire, and Suzanne & Todd Chagnon of Moores, NY; her grandchildren and their families, James Barabe, Thomas Barabe his fianc Kayla Benway and their son, Finley Barabe, Cortni Cleveland, and Alicia Whitehead and her son, Riley Grout; her siblings, Rene, Michelle, Margo, Bob & Rita Larochelle all of Quebec, Canada. Besides her parents, Huguette was predeceased by her husband Marcel Barabe on April 14, 1987; her great grandson, Dustin Audet; her son-in-law, Allen Price; and her grandson-in-law, Tim Cleveland; her siblings, Luc, Clement, Therese, Pierre & Patrice.

Funeral services will be held Saturday, August 4, 2018 at 11:00 AM at St. John the Baptist Catholic Church, 222 Missisquoi Street, Enosburg Falls with Rev. Stan Deresienski celebrating the Mass of Christian burial. Relatives are invited to join the family prior to the Mass at the Spears Funeral Home on Saturday from 9:30 to 10:30 AM Interment will follow in All Saints Cemetery in Richford.

For those who wish, contributions in Huguettes memory may be made to Our Lady of the Meadows - Resident Activity Fund, 1 Pinnacle Meadows, Richford, Vt 05476.

Condolences, photos and favorite memories may be shared through www.gossfs.com
To order memorial trees or send flowers to the family in memory of Huguette Barabe, please visit our flower store.