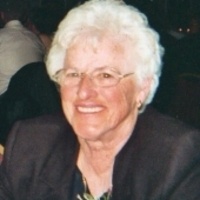 HIGHGATE - Mrs. Irene M. Brosseau, went to be with her Heavenly Father Friday morning May 15, 2020.

She was born in St. Albans on May 28th, 1928, the daughter of the late Phillip and Amanda (Loiselle) Viens. She was a faithful member and servant of the St. Louis Catholic Church in Highgate where she was a member of the Ladies of St. Anne.

Irene was a fun loving wife, mother and grandmother. She raised eleven of her own children and welcomed many many more friends and cousins into her home. She loved to cook and there was always plenty of room and food to share in her big kitchen.

Irene was known for her beautiful cake decorating and shared those talents for many years as a 4-H leader. She loved to travel, garden, crochet snowflakes, listen to music especially Christmas carols, ride roller coasters, light off fireworks and have big bon fires. She will always be remembered zooming down the road in her little Toyota with the red ball on the antenna. Her memory will live on for years in the crochet ornaments that decorate all of her children and grandchildrens Christmas trees.

In 1982 she won the Mrs. Maple contest with her famous Maple Dream Bars . Irene always had a batch or two in her freezer for guests to help themselves, even if she wasnt home.

Irene will be dearly missed by the five generations she leaves behind. She leaves two sons and their wives, Philip L. and Donna Brosseau, and Daniel and Lise Brosseau all of Highgate; eight daughters and their husbands, Diane and Steve Murphy of Sebastian, FL, Patricia and Fernand Gagne of Highgate Springs, Elaine and Michael Chevalier of Highgate Springs, Joanne Brosseau of Addison, Nancy and Steven Cadieux of Highgate, Laurie and Raymond Bushey of Sheldon, MaryBeth and Marc Barnum of Franklin and Lisa and Glenn Dockham of Milton; a son-in-law, David Burnor of Fairfield; 31 grandchildren; 53 great grandchildren; and 8 great-great grandchildren; a brother, Joseph Leonard and his wife Jean Viens; a sister, Sister Bertha Viens; and two sister-in-laws, Claire & Therese Viens.

Irenes family would like to thank the staff from Giordano Manor, The Homestead at Pillsbury, and Birchwood Terrace for the loving care she received.

In keeping with current restrictions, a private graveside committal service will take place Friday, May 22, 2020 at 2:00 PM in St. Louis Cemetery in Highgate. There will be a Mass for all to attend after restrictions have been lifted.

Friends and family are invited to her memorial Mass at 11:00 AM on Saturday, May 8, 2021 at St. Louis Catholic Church, Lamkin St., Highgate.

To order memorial trees or send flowers to the family in memory of Irene M. Brosseau, please visit our flower store.