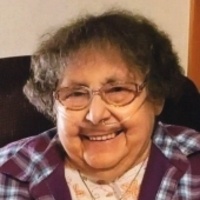 Irene attended St. Annes School, and married Edwin in 1955. Irene was a woman of true faith; she was a devout Catholic and very active in the Nativity and St. Louis Church Parishes. She enjoyed cooking and baking for her family, and spending time with her beloved poodle, Jade. Her homemade cut french fries and strawberry rhubarb pie will be missed by her family. Irene and Edwin loved taking rides through the countryside together. She also loved playing cards with Alice, Yahtzee, watching the birds, stopping at lawn sales and flea markets, Tuesday shopping trips with her sister, Barbara, and attending Red Hat Society gatherings. Irene was a diehard Los Angeles Dodgers and Golden State Warriors fan!

She is survived by her three children, Holly Freeman of Swanton, Morris Freeman and his significant other Nicole McLaughlin of Highgate, and Jack Freeman and his wife Bonnie of Highgate; grandchildren, Christie, Jack Jr. and Jennifer, Travis, Jason and Ashley and Jessie Freeman; great grandchildren, Alanna Freeman and Jake Fregeau, Noah Bjornson, Hailey, Abigail, Alyvia, Evalynn and Jackson Freeman; and several nieces, nephews and special friends. Besides her parents, Irene was predeceased by her husband, Edwin in 1998; and several siblings, especially her sister who was her best friend, Barbara Guilbault.

A private graveside service will be held in the family plot in the St. Louis Catholic Cemetery.

For those who wish, contributions in Irenes memory may be made to the St. Jude Children\u0027s Research Hospital, 501 St. Jude Place, Memphis, TN 38105.

Condolences, photos and favorite memories may be shared through www.gossfs.com.
To order memorial trees or send flowers to the family in memory of Irene M. Freeman, please visit our flower store.