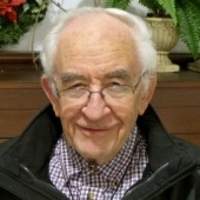 James graduated from Groton High School in 1952. After graduation, he worked at Senator Frenchs farm for a short time before starting his career in the animal feed business. He worked for several different feed businesses throughout his life. James was a devout Christian. He was a leader of the Christian Service Brigade in the Groton Baptist Church, a leader of Awana Youth Ministries in the Union Baptist Church in St. Johnsbury and an Elder of the Swanton Christian Church. James was a very active member of all churches for many years. His favorite hobbies included camping, fishing, riding his bike, and joking around. James had a great sense of humor that will be missed by everyone who knew him.

He is survived by his children, Bruce Crown and his wife Debbie, and Anthony Crown all of Landrum, SC; his grandchildren, Jordan, Casey, Austin, Bayley, Colby, Carli & Shaylynn; a sister, Ruth Wilson of Groton; and several nieces & nephews. Besides his parents, James was predeceased by his brothers, Wendall, John, Merle & Lyman Crown.

For those who wish, contributions in James memory may be made to the Swanton Christian Church, 10 Farrar St., Swanton, VT 05488.

Condolences, photos and favorite memories may be shared through www.gossfs.com
To order memorial trees or send flowers to the family in memory of James B. Crown, please visit our flower store.